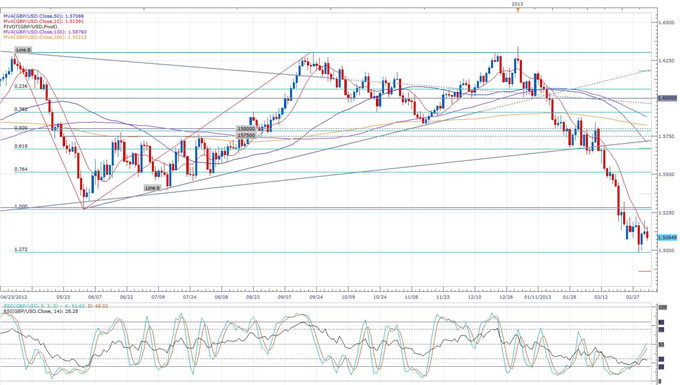 Pound Falls Below 1.50 as US Dollar Corrects Earlier Losses

Since starting my day when Asian markets were closing until the time of this writing, the US Dollar has made an impressive 32 point reversal according to the FXCM index. However, there doesn’t seem to be any negative shift in risk trends, as is often seen with an upturn in the safe haven US Dollar against other risk-correlated currencies, as European equities are trading higher since today’s open, and Italian and Spanish bond yields have declined.

There were also few significant stories during today’s European session to affect trading. Regarding Spain, Budget Minister Montoro said the budget gap may be less than first estimated. The positive effect on the Euro from Montoro’s comments was short lived, as EUR/USD quickly resumed its decline towards 1.3000. The Italian debt chief said the markets have reacted quite well to the elections, but there is an appetite for longer maturity debt. Italian 10-year bond yields are now trading 8.9 bps lower to 4.64%, but the comments also had little impact on Euro trading.

The biggest victim of the US Dollar strength over the European session was the British Pound. GBP/USD fell about 80 points over the session, falling as low as 1.5063 in Forex markets. The pair may now see support by the key 1.5000 level, which although was broken briefly last week, the pair has not closed below there in about 3.5 years. Resistance may be provided by the broken resistance around 1.5280.

In economic releases, Euro-zone GDP was confirmed to have declined 0.6% in Q4, as was estimated by an earlier release. The region has now seen 5 straight quarters of economic decline, but the Euro did not react to the as-estimated revision.

In the afternoon, the US Fed Beige Book will be released at 19:00 GMT. Maybe expectations for the Fed release are driving US Dollar prices, but not for certain.