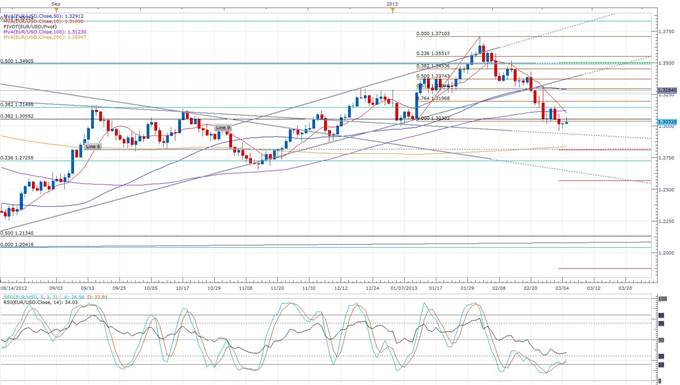 The meeting of European Union finance ministers kicks off today following yesterday’s meeting of Euro-zone ministers in Brussels. The most important message from yesterday’s meeting for Euro traders was that austerity targets for growth starved countries, like France and Italy, may be relaxed. Other topics at the meeting yesterday included the Cyprus bailout and discussion of capping bankers’ bonuses, neither topic has had significant impact on Euro trading.

The Euro rose about 40 points against the US Dollar in today’s session on better than expected PMI releases from around the Euro-zone. However, the composite output index for February was still lower than January’s 10-month high index result. Euro-zone retail sales beat expectations at 1.2%M/M for January, but the release did not affect the already improved Euro prices.

Soon after, EUR/USD fell back towards 1.30 in Forex markets following a sale of Greek bills. 26-week treasury bills were sold for an accepted 1.3175 billion Euros. The yield on the bills was 4.25%, slightly better than the 4.27% yield in February. However, the Euro fell back to around 1.3025 as the improved yield didn’t stop the single currency decline.

Also in economic releases, the UK PMI for services improved to 51.8 in February, which sent the Pound back to 1.52 against the US Dollar.