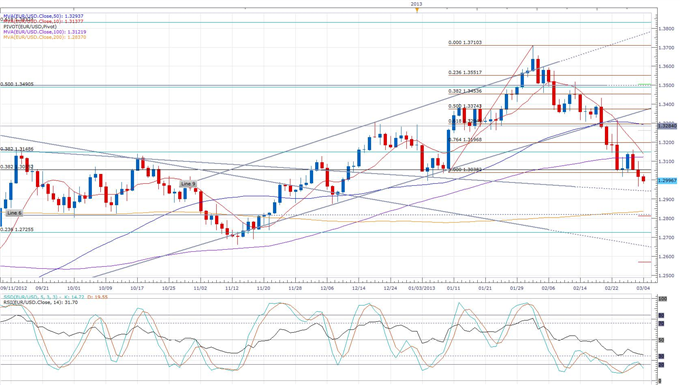 Euro Fails to Stay Above 1.30 Ahead of the Finance Ministers Meeting

The Euro has again declined below 1.3000 against the US Dollar in today’s session, after setting a new 2-month low at 1.2966 on Friday.

The first dip below 1.30 seemed to be unrelated to any new story, but rather may have been an expression of the uncertainty surrounding the political situation in Italy. Euro-zone finance ministers will be meeting in Brussels this afternoon, and they are expected to discuss the Italian uncertainty as well as a Cyprus bailout. Italian bonds yields were 6 basis points higher at some points in the session.

The Euro then declined below 1.3000 again following a disappointing UK PMI for construction and a lower Sentix Investor Confidence survey. The UK PMI also sent GBP/USD towards the key 1.500 figure. The 1.30 figure may now provide resistance, and support could be provided by the current 3-month low at 1.2876.

The Yen has seen a bit of volatility following a lot of comments from Japanese officials and BoJ nominees. BoJ governor nominee Kuroda said earlier in the session that he will do whatever he can to achieve 2% inflation if he is appointed as the central bank head. While BoJ deputy governor Kikuo said that fiscal and monetary stimulus must occur at the same time. Also, Japan Vice Finance Minister Nakao said Abenomics have been successful so far, and the Yen depreciation reflects the global economy and the US recovery. USD/JPY set a new weekly high at 93.72 during overnight trading.