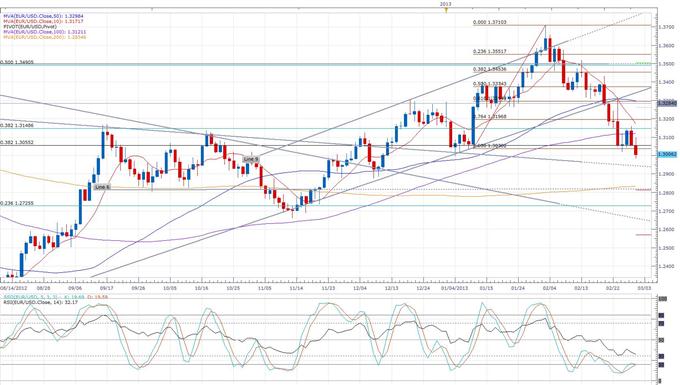 Euro Falls Below 1.30 as a Bearish Picture is Painted by Economic Releases

The Euro has fallen below 1.3000 for the first time in nearly two months as a bearish sentiment emerged from a number of economic releases during the European hours.

The big story of the European session was the PMI releases. The index for manufacturing in Italy was lower than expected, and estimates for UK PMI were way too high, triggering a 100 point decline in GBP/USD on the actual release. The Euro saw a 70 point decline from the session high following the disappointing PMI’s in Italy and the UK, but is only slightly lower than the daily open.

Also announced today, the ECB said European banks will pay back 12.5 billion Pounds next week of the two 3-year LTRO loans. The 4.176 billion that will be repaid of the first loan is an increase from last week’s 1.74 billion. The 8.32 billion that will be repaid for the second loan follows last week’s initial 61.1 billion Euro early payment. Last week’s initial payment disappointed expectations for about twice that amount. However, the Euro showed little reaction to this week’s announcement.

Earlier in the session, reports surfaced that Italy’s center left Bersani has ruled out a coalition with Berlusconi’s center-right. The announcement seemed to add to speculation that Italy will return to the polls, and the Euro started the decline from the day’s 1.3100 high against the US Dollar.

The Euro is currently trading slightly below the key 1.3000 figure, and support could be provided by a three month low of 1.2876.