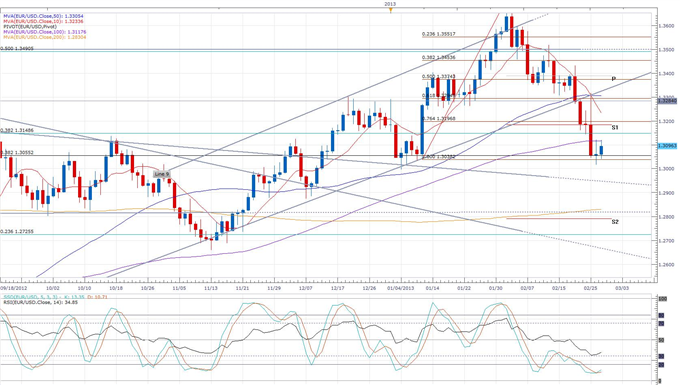 A mix of bearish and bullish news in today’s European session has left the Euro with a 40 point gain since the start of today’s trading, a pretty small move when compared to the 300 point selloff over the past week.

While we didn’t hear any new developments about the political stalemate following the Italian elections, we got more of an idea of investor sentiment regarding the country’s debt. Ten-year bonds sold for a 4.83% yield in today’s auction, higher than the 4.17% yield in the January auction. The sale of 5 and 10-year bonds still met a maximum target of 6.5 billion Euros, but the rise in yields led the Euro to fall below the 1.3100 line against the US Dollar.

The rise in yields unwound all the gains seen after the better than expected Euro-zone economic confidence survey. The survey beat expectations and reached a nine-year high according to the European Commission. Consumer confidence seems to be falling in line with an ECB forecast for a recovery later in the year. Also in the Euro-zone, the German GFK consumer confidence rose to 5.9 for March, which gave the Euro a small boost at the beginning of the session.

The Pound also saw a small spike above 1.5100 following the better than expected Euro-zone economic confidence, as improved confidence should also benefit the nearby UK economy. The 0.3% decline in UK GDP in Q4 was confirmed today by a second preliminary estimate, and the release had little effect on Forex trading.

The Pound erased some of its previous gains when Bank of England member Bean said some seemingly dovish comments. Bean said the BoE’s inflation targeting shoud undergo a fit-for-purpose review. The comments could have suggested Bean’s consideration of a nominal growth target, which is why the Pound fell to 1.5100 after the comments.

Meanwhile, ECB member Coeure said the OMT bond buying program is not a nuclear deterrent, possibly implying that yields in certain countries may rise despite the program. EUR/USD slipped slightly on the comments.

In Japan, the Yen has strengthened somewhat over the European session despite an official announcement that the BoJ nominations will be presented tomorrow at 11a.m. (Tokyo time). It’s possible that the expected appointment of Kuroda as the new BoJ head has already been priced in and won’t have any negative effects on Yen trading, but it is only possible and not certain.

Despite no news out of Australia during the European session, overall sentiment brought the Aussie Dollar to a 6-month low against the US Dollar; possible support may be provided by a 7-month low of 1.0149.