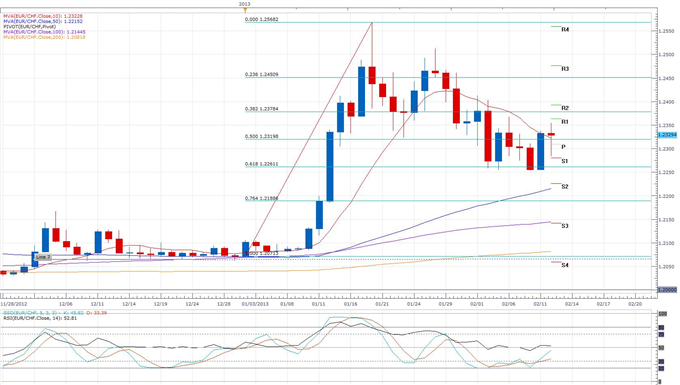 It’s hard for an addict to admit that he has an addiction.

That was the feeling felt as Swiss National Bank President Jordan denied the existence of a currency war only minutes after pledging to continue purchasing Euros with Francs without restrictions if necessary. Jordan said the Franc cap was necessary as it responded to domestic needs, but had nothing to do with a currency war.

The Swiss Franc declined from the SNB reinforced 1.20 ceiling against the Euro last September, following 12 months of monetary intervention. Jordan said he now doesn’t see any more monetary interventions unless it is necessary, and he expects the Franc to continue to weaken without further help from the SNB. Jordan predicted 1-1.5% Swiss GDP growth in 2013.

Upon Jordan’s initial comments that the SNB is willing to take further measures in currency markets, EUR/CHF rose 50 points to 1.2350. However, the pair unwound half those gains as the central banker said he doesn’t see the need for further intervention. Resistance might be provided for the pair at a broken support line around 1.2378, while support could be provided at a monthly low at 1.2254.

The feeling of denial could also have been felt when Japan Finance Minister Aso said a G7 statement confirms that Japan’s policies are not aimed at currency levels. The Group of 7 released a statement which reaffirmed its commitment to market determined exchange rates, and the group said it will not target exchange rates. The group further said that currency volatilities can adversely impact economic stability. The Japanese official quickly responded that the G7 had supported Japan’s policy by not specifically mentioning the country in the statement. Unlike Switzerland, the BoJ recently announced a 2% inflation target, and has not directly referred to a currency level. However, monetary stimulus provided to increase inflation will also weaken the Japanese Yen, which is beneficial for Japanese exports.

The European Central Bank has thus far refrained from participating in the so-called currency wars, which has led to massive Euro gains against the Japanese Yen in recent months. There have been varying responses from European leaders on the Euro strength. France PM Hollande said today that currencies shouldn’t be used as weapons, while Luxembourg PM Juncker said there is no optimal rate for the Euro. ECB member Constancio said today that unilateral FX interventions shouldn’t happen, and the only Forex consideration is the impact on inflation.

The meeting of the Group of 20 set for later this week will likely focus on this issue. Any comments from officials regarding intended actions in response to the currency wars could obviously affect the discussed currency.

European Union finance ministers are meeting today. Ireland Finance Minister Noonan said the ministers will discuss the G-20 meeting and said that Ireland supports ESM direct recapitalization of banks, which will likely also be discussed in the meeting.

The only major economic release during the European session was UK inflation for January, which remained at 2.7%. GBP/USD declined to a new 6-month low ahead of the release.