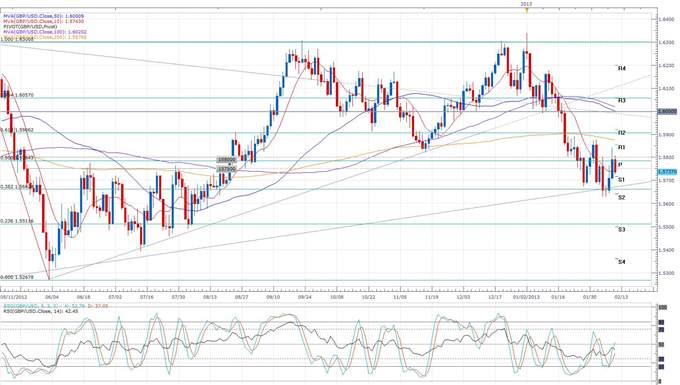 Despite markets remaining closed on Monday in Japan and China for respective holidays, the Aussie, Pound, and Yen all started the week with significant declines against the US Dollar in Forex trading.

The British Pound saw a sharp 60 point decline against the US Dollar over the European session because of an article by the UK Telegraph. The Telegraph reported that the three-month Bank of England inflation report, which is set to be released on Wednesday, will raise the inflation forecast to above 2% until 2015 while lowering the growth forecast. The Telegraph predicted some dovish comments from the BoE report despite the higher inflation. The lower growth forecast would contradict earlier comments by BoE Governor King, who said a gentle recovery is underway in the UK.

GBP/USD is currently trading around 1.5750 at the time of this writing. A 6-month low of 1.5630 could provide support, while the key 1.5800 level could continue to provide resistance.

Towards the end of today’s Asian session, possible BoJ governor candidate Kuroda said that additional stimulus can be justified for 2013 and the 2% inflation target is appropriate. Following Kuroda’s comments, USD/JPY saw a steady rise to a session high just below 93.00.

The Aussie Dollar has seen some declines against the US Dollar over Monday’s session, following weaker than expected Australian home loans. Mortgages declined 1.5% in December, thereby disappointing expectations for no change in home loans. A near 4-month low may continue to provide support around 1.0255.

Despite a lack of significant economic releases in today’s European and North American sessions, there is still substantial event risk surrounding this morning’s release of the Group of 30 global economy report and today’s meeting of Euro-zone finance ministers. The Euro-zone finance ministers are expected to discuss aid for Cyprus, Greece’s economic reforms, and plans for direct bailouts of struggling banks from the ESM permanent bailout fund. Any noteworthy agreements on the ESM bailout issue could be Euro positive.