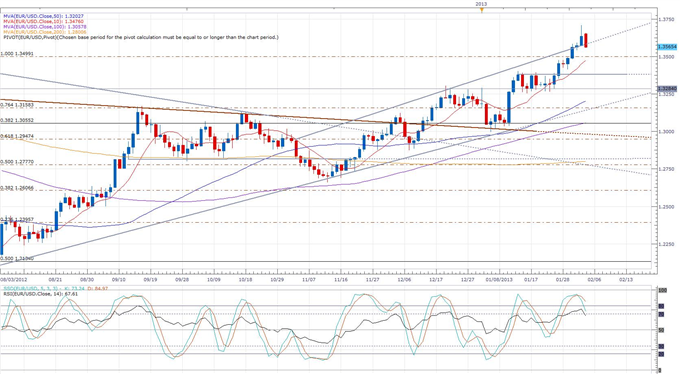 Political Allegations in Italy and Spain Send Euro Below 1.3600

In only six months, Forex traders have heard sentimental chatter about the Euro-zone flip from talks of an imminent Euro breakup to predictions of a Euro-zone recovery by the end of the year. That sharp turn in sentiment was accompanied by a 1500 point rally in Euro trading against the US Dollar. However, the speed of the change in sentiment has left skeptics waiting for a story to reinforce their doubts over the recovery.

The story that most recently tempered optimism was not a negative growth reading or rising bond yields, but political allegations that have swept over two of the Euro-zone’s struggling countries, Italy and Spain.

In Spain, the opposition leader has been calling for PM Rajoy to resign following a new report alleging that the prime minister took secret illegal cash payments. Rajoy has denied the allegations. This afternoon, Rajoy will hold a press conference with German Chancellor Merkel following a meeting between the two leaders.

In Italy, PM Monti has been losing ground in the polls ahead of the elections later this month because of the Monti Paschi scandal. The government approved a 3.9 billion Euro bailout for the bank only months before the bank reported 220 million Euros of losses to shady derivative deals. Monti recently passed reforms to the Italian economy, and if his successor undoes those reforms it would be seen as Euro negative.

There are also worries that the recent Euro strength may hurt European exports, especially as the ‘currency wars’ intensifies, with the SNB keeping its own currency weaker and the BoJ raising stimulus. Over the weekend, France Finance Minister Moscovici said the Euro may have become too strong in some respects.

These collective worries have helped erase all the gains in Friday’s trading and drive EUR/USD below 1.3600. The broken resistance line around 1.3500 may now provide support, and resistance could now be provided by the 14-month high recently set at 1.3710.

In economic releases, the Sentix investor confidence in the Euro-zone rose to a 19-month high in February, while producer prices continued to decline in December. Also today, Spain jobless claims rose by 132,055 in January. On a positive note, the S&P reported that debtor countries are rapidly rebalancing.

The Japanese Yen dropped to 93.00 against the US Dollar for the first time since 2010 in today’s session. There was no major Yen-related story in today’s session, rather the selloff may have been a sign of anticipation ahead of an expected announcement of the BoJ governor nominee.