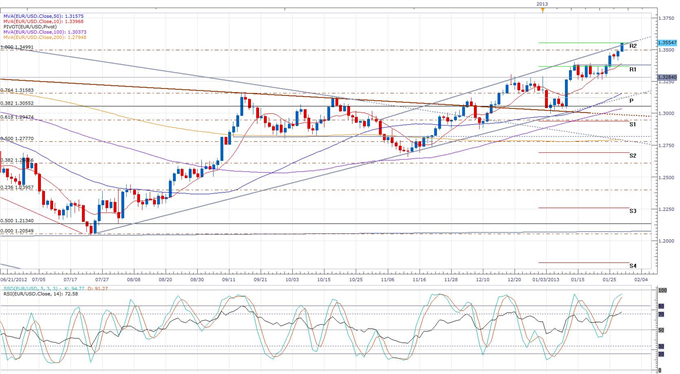 The European Central Bank predicted earlier this month that the Euro-zone will begin a recovery later in 2013, and today’s Euro break above a 13-month high seemed to show a lot of market support for this view.

The biggest story that seemed to warrant further Euro bullishness during today’s session was the improvement in Euro-zone economic confidence in January. The confidence indicator rose to 89.2 from a previous 87.9, and consumer confidence was confirmed at -23.9. The higher but still negative indicators were in line with improved PMI’s released earlier in the month.

Austrian ECB member Nowotny said today that the economic outlook for Europe is improving but growth rates remain weak. Nowotny further said that that EUR/USD is still trading in a long term range, implying a lack of worry over recent Euro gains.

In Spain, the GDP for the fourth quarter dropped slightly more than expected. Following the news of the 0.7% economic contraction, PM Rajoy said that changing the deficit goals would send the wrong message.

In Italy, the government sold 2022 bonds for 4.17% yield, the lowest since October 2010. The government met the maximum target in a sale of 2017 and 2022 bonds. The Italian business confidence for January was announced today at 88.2, slightly lower than December’s 88.9 confidence survey. German Chancellor Merkel will meet Italy PM Monti in Berlin tomorrow.

The Pound also continued to rally after putting in a 5-month low two days ago. Better than expected improvement in the UK mortgage approvals helped Sterling climb higher.

The two and a half year high in USD/JPY was nudged slightly higher in today’s trading to 91.40. PM Abe said that changing BoJ law is still an option, and the priority is to quickly achieve the 2% inflation target.

This afternoon is a big one for the US Economy. The GDP for the fourth quarter will be announced at 13:30 GMT, and then later the FOMC will declare its rate decision and updated asset purchase target.