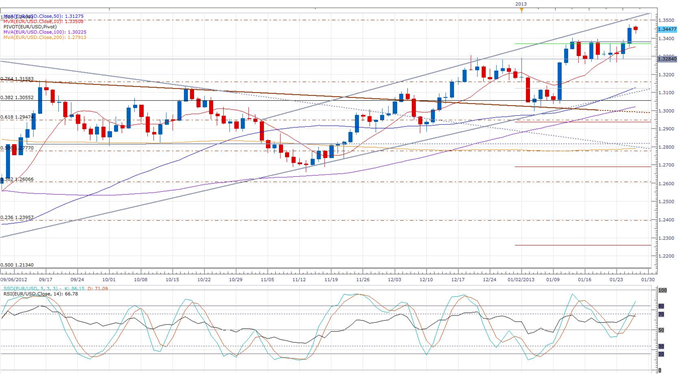 It’s been a quiet European session, as the only significant economic release was the Euro-zone money supply and very little chatter was seen from European leaders.

Despite the quiet session, Sterling set new five month lows against the US Dollar following weekend comments from future BoE Governor Carney. USDJPY also unwound from a high set on Friday and dropped back below 91.00, and the pair is trading around 90.65 at the time of this writing.

During the session, France Finance Minister Moscovici said the 75% tax on earnings over 1 million Euros is still necessary, although it will be temporary. Moscovici also said that it’s possible to reverse the jobless trend in 2013, and he hopes for a return to growth in the second half of 2013. The comments had no significant effect on price movement.

In economic releases, Euro-zone M3 money supply rose 3.7% in the 3 months that ended in December, slightly higher than the 3.4% rise in the period that ended in November. Greek bank deposits rose by 4.1% in December. In Italy, consumer confidence dropped to 84.6 instead of rising to 86.0 as was expected.

The Euro has erased the weekend gap in today’s trading and currently trades around 1.3449 against the US Dollar in Forex markets. EURUSD set an 11-month high at 1.3479 in Friday’s trading, which could continue to provide resistance. A previous resistance line around 1.3389 could now provide support.