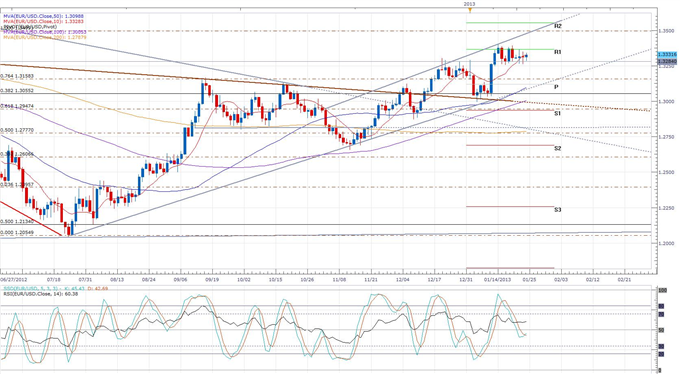 Speaking at the Davos World Economic Forum, UK Prime Minister Cameron continued to defend his decision to announce a referendum over the UK membership in the European Union. Cameron said that he would like to make the changes to the EU so that Europe can become an engine on growth. He said he wants to lower trade barriers, and mentioned that trade deals on the table could add 2% to GDP.

Cameron’s speech was received warmly by German Chancellor Merkel, who said she is willing to negotiate with the UK; Cameron’s comments also received a warm reception by the Danish government. However, there are still worries that the uncertainty until the referendum, which could take place anytime between 2015 and 2017, could weigh on business confidence.

The Euro saw a brief decline towards 1.3300 against the US Dollar following disappointing French PMI results, but quickly returned to the 1.3330 area on outperforming Euro-zone and German indexes. EURUSD is trading around 1.3320 at the time of this writing; resistance could be provided by an 11-month high recently set at 1.3404, while the broken resistance line at 1.3284 could continue to provide support.

In other economic releases, Spain unemployment was announced at 26.0% in Q4 of 2012. UK loans for home purchases rose to 33,636 in December from a revised 33,551 mortgages. Tomorrow, the UK GDP for Q4 will be released in the European session. BoE Governor King said economic growth may have declined following one time growth factors in Q3.