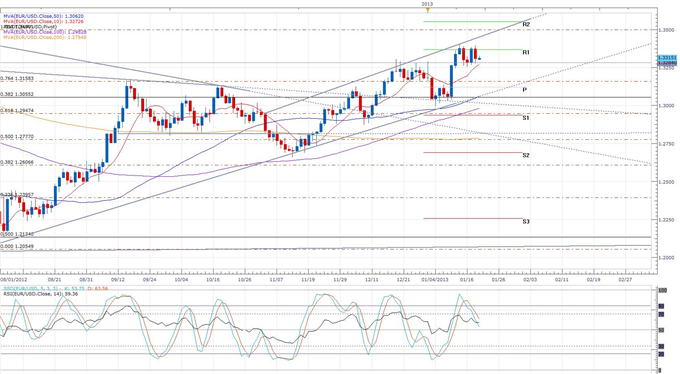 It’s been a quiet European session so far, as a lack of significant data combined with the American Martin Luther King Jr. Holiday has provided conditions for a low volatility trading day.

The major event for today is the meeting of Euro-area finance ministers this afternoon, which precedes tomorrow’s meeting of European Union finance ministers. Possible topics of discussions for the two meetings could be a bailout for the struggling Cyprus or further decisions regarding the start of the ECB single bank supervisor and direct recapitalization of Euro-zone banks. The prospect of a Cyprus bailout doesn’t seem important enough to move markets, but any new decisions regarding the banking supervisor may have an impact on Euro price action.

In economic releases, German producer prices dropped 0.3% in December, lower than an expected no-change in prices over the final month of the year. Swiss industrial production increased 2.2% in the third quarter of 2012.

The Bank of Japan began its monthly two-day meeting today, and will announce its target interest rate and asset purchase target tomorrow. Expectations are for the central bank to increase asset purchases and raise its target inflation rate to 2%, as the government has been pushing for. A combined statement from the government and BoJ will likely be released following the meting.

The Euro opened the new week of trading a few points below where it closed on Friday against the US Dollar, but still above the 1.3300 figure. EURUSD quickly popped up to 1.3325 and has remained in a tight range over the session thus far. Resistance could be provided by an 11-month high recently set at 1.3404, while the broken resistance line at 1.3284 could continue to provide support.