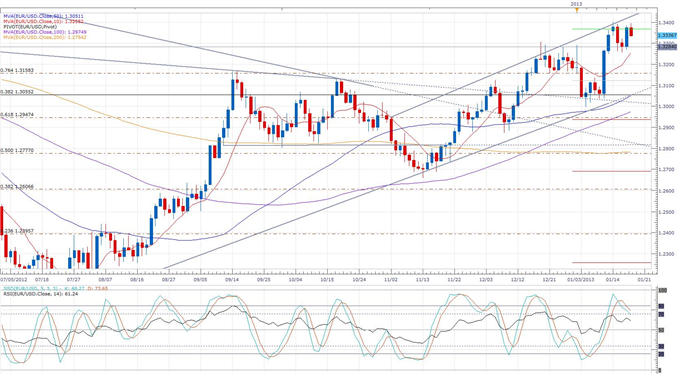 Forex News: Euro Fails to Break Above 1.34 in a Quiet Session

Despite a quiet European session with little talk about the issues affecting Euro trading, EURUSD saw a significant 50 point decline in Forex markets over the past few hours.

There was also very little economic data during the Europen session. Italian industrial orders fell 0.5% in November, and Spanish bad loans increased to 11.38% in November from 11.23% in October. In the UK, retail sales disappointed expectations by declining 0.3% in December. Following the news, Sterling continued an earlier decline that reflected the drop in Euro, but was slightly more extensive.

International Monetary Fund head Christine Lagarde made comments earlier today that it is a critical year for Greece and the country must meet its targets. She also said that no further wage cuts are needed as long as reforms are implemented. Shortly following her comments, Greek 10-year bond yields were trading 32.7 bps higher, but soon after the yields switched direction and were trading 19.9 bps lower to 10.84%.

EURCHF set a new 20-month high and was trading 90 points above today’s open at one point but soon declined back below the session start.

EURUSD is currently trading slightly below 1.3350. Support might be seen by a broken resistance line at 1.3284, and resistance could be seen by the recently set 11-month high at 1.3404.