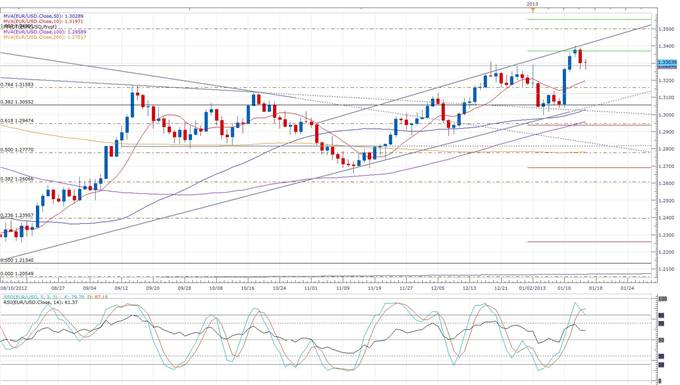 Just yesterday, the German Economy Ministry cut its forecast for 2013 to 0.4% growth in the Euro-zone’s biggest economy. But fast forward to today, and the German Economy Minister Roesler had a more optimistic tone. Roesler said that markets are regaining trust in the Euro, and that Germany has survived the crisis the best out of all the countries in the Euro. Regarding the joint currency, Roesler said that Germany is willing to pay the price to save the Euro and won’t accept a weak single currency.

Euro traders liked Roesler’s comments, and the single currency rose 45 points against the US Dollar in forex markets. EURUSD may now see resistance at 1.3404, by a ten-month high set in recent trading. Support could be provided by a broken resistance line around 1.3284.

The rise in Euro continued as the ECB released its monthly bulletin. The bulletin reported that the central bank is expecting the Euro-zone economy to recover later into 2013.

Also in Europe, Spain met its 4.5 billion Euro maximum target in today’s sale of 2015, 2018, and 2041 bonds. 2041 bonds sold for an average yield of 5.696% versus an average 5.893% yield in December. In Greece, Finance Minister Stournaras ruled out another debt buyback and said there have been no discussions of a haircut.

In other currencies, the Euro rose to 1.2450 against the Swiss Franc for the first time in 13 months and set a new yearly high at 1.2457. It is unclear if the rise in the cross was due to the Euro strength from this morning or from weakness in Franc trading. The next possible resistance could be seen at an 18-month high of 1.2472.