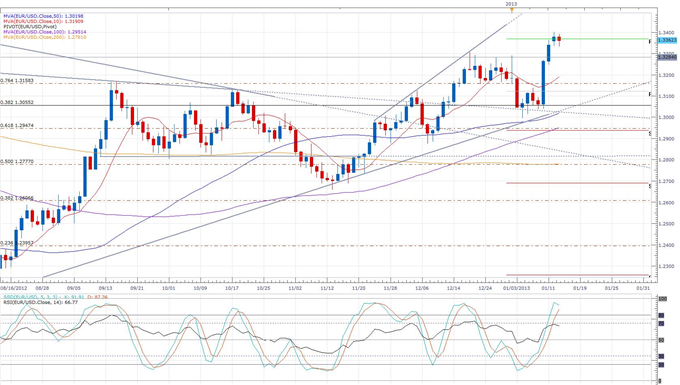 Euro and sterling are both down in today’s European session following news of weaker German economic growth and steady UK inflation. However, the price moves didn’t seem to be direct responses to economic releases or comments, but rather reflective of swings in bigger sentiments.

German economic growth was reported at 0.7% for the entire year of 2012, which disappointed expectations. However, government spending saw a surprising surplus. Handelsblatt reported that the German government is cutting its growth forecast for 2013 from 1% to 0.5%. German inflation was confirmed at 2.0% on average for the year 2012, while UK inflation was reported at 2.7% for the third straight month.

In Spain ,12-month and 18-month bills were sold for 5.75 billion Euros, much higher than the 5.5 billion maximum target. 18-month bills sold for an average yield of 1.687% versus 2.778% yield for bills of the same lengths in a December sale. The lower yields show positive reactions to recent fiscal actions by Euro-zone leaders, and a trust in the ECB’s threat to purchase struggling countries’ bonds.

Bank of England Governor King said after the sale that ECB actions have calmed markets and bought time, but he said the ECB won’t solve underlying problems. BoE’s Bailey said the jury is still out on the impact of the Funding for Lending Scheme. The combination of FLS and higher UK inflation were suggested as the reasons the BoE didn’t raise its asset purchase target in its last meeting.

Finally, European Commission President Manuel Barroso said that he is seeking a final ECB banking oversight deal within weeks, and not months.

The Euro is currently trading around 1.3350 against the US Dollar in currency markets. EURUSD rose above 1.3400 for the first time in ten months yesterday, and could continue to see resistance by the key figure. Support could be provided by a broken resistance around 1.3284.