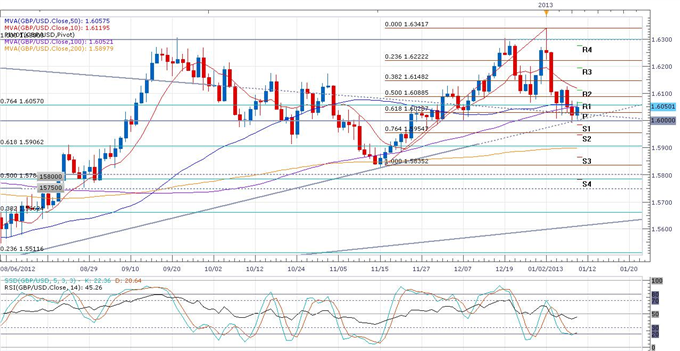 THE TAKEAWAY: BoE keeps the asset purchase target at 375 billion and the interest rate at 0.50% -> FLS and higher inflation may be behind lack of additional stimulus -> Sterling trading steady

In December’s meeting, the Monetary Policy Committee voted 8-1 to not raise its asset purchase target, the vote to hold the interest rate was unanimous. According to the minutes from the December meeting, the BoE still sees inflation remaining above the target 2% in the upcoming year, which is why it didn’t raise monetary stimulus.

The BoE has also mentioned its hopes to see the success of its Funding for Lending Scheme, which makes additional liquidity available to banks for the purpose of lending to homes and businesses. However, a return to negative growth in Q4 could put pressure on the BoE to raise its asset purchase target, which would be Sterling negative in Forex trading.

Earlier in the day, the Euro was sent higher by a successful Spanish bond sale. The government collected 5.8 billion Euros from a sale of 2,5, and 13-year bonds, beating a maximum target of 5.8 billion Euros. Spanish 5-year bonds were sold for an average yield of 3.99%, higher than the 4.68% received at an auction in November. Following the auction, Spanish bond yields fell below 5% for the first time since March 2012. It seems like monetary and fiscal actions taken by Euro-zone leaders have kept market confidence higher for investments in Spanish and Italian debt.

In France, the Bank of France estimated the GDP in Q4 to have fallen 0.1%. The central bank also released the December business sentiment at 95, higher than expectations for the sentiment to remain at 91. The release had little effect on Euro trading. In Greece, unemployment in October was estimated at 26.8%, and inflation was reported at 0.8% in December.

In Japan, new Komeito leader Yamaguchi said the size of the government’s fiscal stimulus will be 10 trillion Yen. Economy Minister Amari refused to confirm the size of the stimulus. Reports were also released by Forex news sources that the Bank of Japan may raise its 2014 inflation target during the next meeting.

The British Pound did not significantly react to the BoE announcement in trading against the US Dollar. GBPUSD saw a modest rally from the key 1.6000 line up to 1.6050 in the hours leading up to the BoE decision, where it now continues to trade. Resistance might next be seen at 1.6089, by the 50% retracement of the rally from November’s low to January’s high.