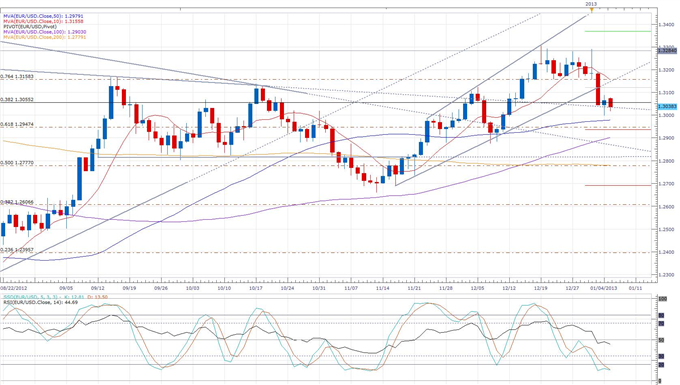 Forex News: First Full Week of the Year Opens with a Drop in Euro

Welcome back to the first week of holiday-free trading and what will hopefully be a return to pre-Thanksgiving liquidity levels. Following a slight bump during Friday’s trading after the US change in NFP’s, the Euro has fallen back towards 1.3000 against the US Dollar in today’s Forex markets.

There was little chatter and few releases during today’s European session. German investors’ expectations for the Euro-zone have turned optimistic according to the Sentix index for January. UK house prices rose 1.3% in December according to Halifax, and Swiss foreign currency reserves dropped slightly from November’s revised 427.4 billion Francs of holdings. None of the releases had significant effect on price movement.

Tomorrow, German Chancellor Merkel and Greek PM Samaras will be meeting in Berlin. A German government spokesman said there will be a briefing before the meeting. The meeting comes ahead of the release of the second tranche of the aid payment agreed upon in December.

In Italy, PM Monti has agreed to run with a centrist bloc ahead of the elections on February 24-25. Today, former PM Berlusconi said his People for Freedom Party will run with the Northern League, and he will serve as an economy minister in a right government. They are running on a platform that northern Italian districts should pay for less of the needs of the southern part of the country.

There are no other major economic releases scheduled for the rest of today’s session.

EURUSD is currently trading below 1.3050, and may see support by the key 1.3000 line. Resistance could be provided by a line around 1.3158, which has provided some resistance over the past few months.