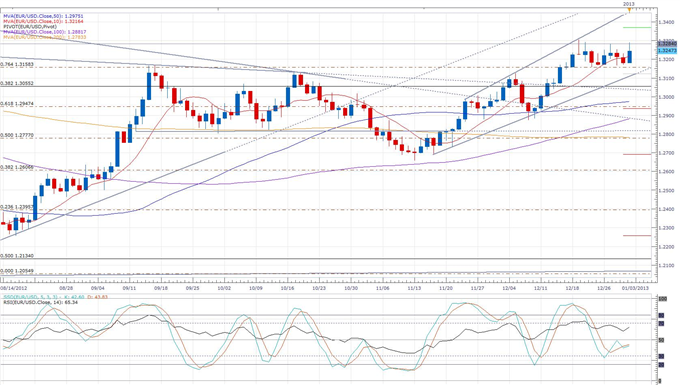 Risk correlated currencies all jumped against safe haven counterparts, and other risk-on assets are also trading significantly higher, following news of the US House of Representatives approval of the fiscal cliff deal. The Euro was trading as high as 100 points against the US Dollar in forex markets before reversing some of the gains.

European stock indexes are almost all trading about 2% higher on the euphoria; the FTSE climbed above 6000 for the first time since July 2011. Spanish and Italian 10-year bond yields are each down more than 10 bps, while UK and German benchmark yields have each climbed more than 11 bps higher.

We also heard some slightly positive comments from Italy this morning. PM Monti said his country has overcome the financial crisis and he sees economic recovery at the end of 2013 or the beginning of 2014. Monti recently announced that he will step down and call for elections following the passing of the 2013 budget. Elections are projected to occur in the spring.

In France, the government announced it maintains a 0.8% growth forecast for 2013.

In economic releases, the Euro-zone PMI for manufacturing was slightly lower than a previous estimate. The UK manufacturing PMI beat expectations by indicating expanding activity. Spain annual inflation was reported at 2.9% in December. German inflation will be reported at 13:00 GMT, 1.9% is expected.

EURUSD is now trading around 1.3250 in currency markets. Resistance remains at the 9-month high of 1.3309, and support could be provided by a broken resistance around 1.3158.