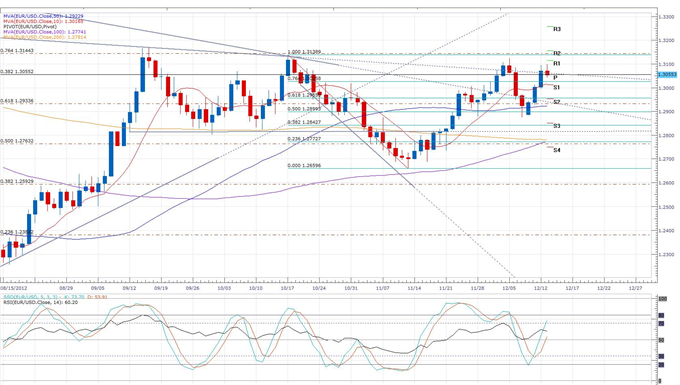 The Greek government completed a buyback of bonds on Tuesday, and that was one of the measures it agreed upon with its creditors in hopes of lowering the country’s debt to GDP ratio to 124% by 2020. Yet despite all the positive predictions, judging from Euro performance in forex markets today, there seems to be doubts over the ministers’ ability to reach an agreement today.

German Chancellor Angela Merkel said the buyback program qualified Greece for aid and that Greek reforms will boost growth. EU’s Rehn also said that he is confident that a decision will be made to go forwards with Greek aid today, and his comments were also reflected by optimistic comments from the French and Dutch finance ministers.

The only doubts about today’s meeting were raised by the Cyprus finance minister, who said that ‘we’ll see’ if Greece gets approval for more aid. As those comments were released, the Euro began a 40 point decline from 1.3090 that more than erased the gains made following the announcement of the banking supervisor approval that was made towards the end of the Asian session. The comments do not seem significant enough to be the sole reason behind the decline, and therefore it is tough to say exactly what was behind the Euro selloff, and it might have been just some unwinding of a 3-day and 200 point rally.

At the start of the Euro decline, the SNB also announced that it will maintain the 1.20 Franc ceiling against the Euro, and there is no limit to the central bank’s purchase of foreign currencies. The central bank also said that the Franc is still too high, and the SNB might take further action. SNB President Jordan later said he hasn’t ruled out negative interest rates.

The Euro is currently trading around 1.3050 against the US Dollar in currency markets, and resistance has been provided over the last 3 month around 1.3139.

In other economic news, the European Central Bank said in its monthly bulletin that it expects the Euro-zone economy to gradually recover in late 2013 following further weakness. The statement echoed ECB’s Draghi comments at the press conference following the rate decision on December 6. The IFO also predicted today that the German economy will contract 0.3% in the current quarter, but expand by 0.7% in 2013. Spain sold bonds today for 2.02 billion Euros versus a 2 billion Euro target, and Italy sold 2015 bonds for 2.50% average yield versus 2.64% in November. Greek unemployment rose to 24.8% in Q3 according to today’s release.