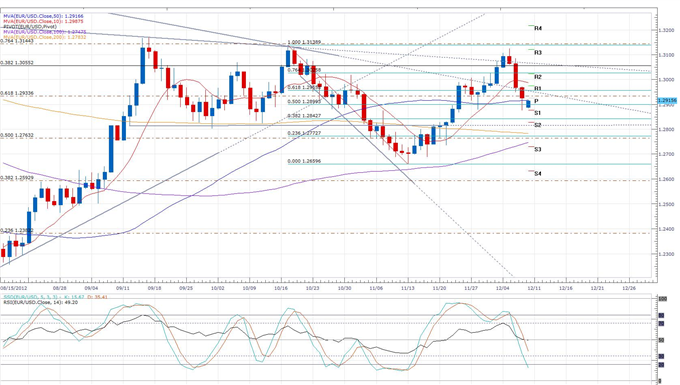 A lot of today’s European session seemed to be about both officials and investors trying to figure out what they think of the weekend news that Italian PM Monti will be resigning following the passing of the 2013 budget. Many have said that confidence in Italian bonds is dependent on the economic reforms that were passed by Monti, and threats to those reforms could hurt Italian bond prices. The news caused the Euro to open nearly 40 points lower on Monday morning than it closed on Friday night against the US Dollar.

The elections are expected to take place in February, and although Monti is not forecasted to win re-election, the frontrunner Pier Luigi Bersani has told the Wall Street Journal that he will not overhaul Monti’s reforms. Today’s first reaction came from Spanish Economy Minister De Guindos, who said that Italy can have a contagion effect on Spain. German Finance Ministry Spokeswoman Kothe said she doesn’t expect the Italian elections to destabilize the Euro-zone. German Chancellor Merkel will meet Monti later today, as the Italian elections is now one of the biggest issues affecting Euro confidence.

Additionally, De Guindos also said that Spain is still considering a bailout request, and he predicted that the GDP will be 1.4% lower for 2012. He called on the EU to help Spain erase doubts about the Euro.

The Euro has slowly inched back above 1.2900 over the course of the session following the lower open. The pair stalled following a Bank of France forecast that the GDP will fall 0.1% in the fourth quarter. A higher than expected German trade balance and Euro-zone investor confidence survey had no effect on trading in forex markets.

In Greece, the government announced that they will extend their bond buyback program until tomorrow. Supposedly they are close to their 30 billion Euro bond purchases target. Also, Greek inflation was reported today at 1% in November.

Furthermore, discussions will continue about the single bank supervisor on Wednesday. Forex news sources reported today that an EU document said that banks with assets over 30 billion Euros will face ECB oversight, as well as cross border banks.

EURUSD is currently trading right around 1.2900, and resistance could be provided by the key 1.3000 level. A support line could be seen over the past two weeks around 1.2875.