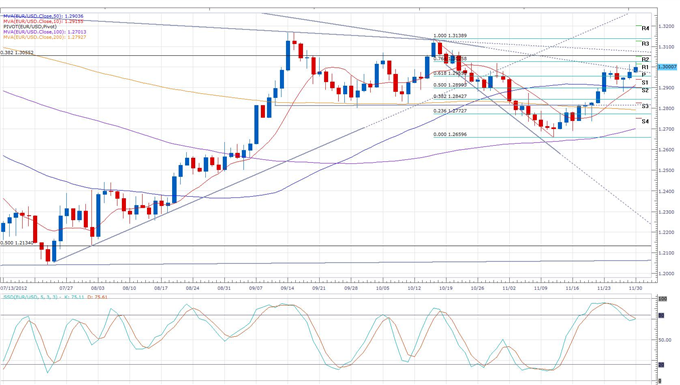 Today’s European session is full of official chatter, and the recent Greek aid deal, the possible single bank supervisor, and the general state of the European economy, seem to be the agreed upon topics of discussion.

ECB’s Draghi began the chatter when he spoke on French television at the beginning of the session. We saw a cart before the horse situation, as the Euro took a fast 30 point rally against the US Dollar and climbed above 1.3000 right before Draghi began speaking. However, Draghi confirmed the rally when he said that he expects the Euro recovery to come in the second half of 2013.

Draghi, IMF chief Lagarde, Italian Finance Minister Grilli, and French Finance Minister Moscovici are all speaking today at the French Treasury Conference. Draghi also said today that he is satisfied with the Greek accord, and that the accord shows that Greece will stay in the Euro. Draghi also said that unified supervision must apply to all banks.

Also speaking at the conference, Lagarde said that she is in favor of the European Central Bank taking the bank supervisory role. She also said that the European economy is fragile.

In Germany, the parliament will vote to approve the Greek aid deal. The opposition Social Democrat Party’s candidate for chancellor, Peter Steinbrueck, said that the party will approve the measure to help Greece, but it is not a vote for Merkel. While speaking to the parliament, Finance Minister Schaeuble said that if Greece defaults, it could lead to a Euro break up. Schaeuble also said that the goal is for Greece to pay its own way.

Also in Germany, retail sales fell by a record 2.8% in October, further indicating that the effects of the Euro crisis are worsening in Germany. Also, the Euro-zone unemployment rate was confirmed to have risen to 11.7% in October, and a flash estimate sees inflation at 2.2% in November.

The earlier Euro sentiment seems to have worn off following the bad economic releases and extensive chatter, and EURUSD is now trading back below 1.3000 in forex markets. The key 1.3000 line might continue to provide resistance, and support could be provided by the former support line of 1.2824.