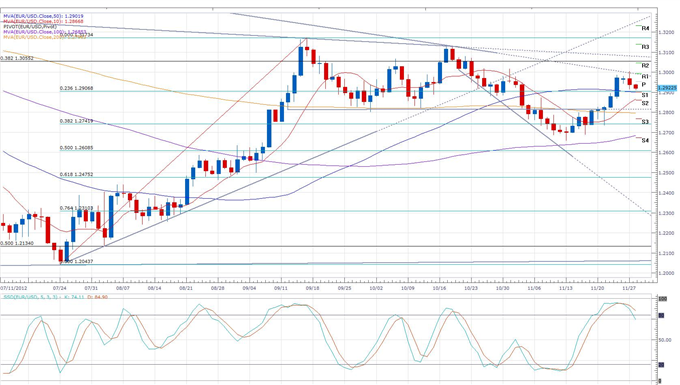 Forex News: Euro Trading Steady Above 1.2900 Ahead of German Inflation

Now that more than 24 hours have passed since the Greece bailout agreement, most of the responding chatter has already been exhausted, and we have been left in today’s European session without a major fundamental story to guide trading. The major story currently affecting asset markets is the impending US fiscal cliff, and Harry Reid’s comments, that not much progress on a deal has been made, sent US equities lower in yesterday’s session.

Furthermore, despite the lack of an upcoming major market moving event, a lot of analysts are calling for a reversal of recent Euro gains, as EURUSD trading showed a false break of 1.3000 in yesterday’s session. DailyFX Currency Strategist Ilya Spivak said he continues to hold the pair short, and Chief Strategist John Kicklighter said in his daily market wrap-up that he initiated a EURJPY short.

The only European data release that could possibly affect trading is the German inflation for November; the average expectation among Bloomberg surveyed analysts is for a 1.9% annual rise in consumer prices.

Also, there has been some small amounts of chatter in today’s session about the Greece deal. ECB member Nowotny said that the agreement was the best of all alternative solutions. Nowotny said that there are no ideal solutions for Greece and that a debt cut is not on the table anymore. He also remarked that Greece has implemented massive reforms, but it is still not enough.

Additionally we heard a prediction from the Bank of Spain that data indicates that the Spanish GDP will continue to fall in Q4, and that ECB measures are starting to wear out. France Finance Minister Moscovici said that the French GDP will rise by 0.8% in 2013. In England, MPC member Bean said the Bank of England hasn’t shut the door on further quantitative easing and that uncertainty is limiting stimulus effectiveness.

The Euro is currently trading above 1.2900 against the US Dollar in forex markets. Resistance might continue to be provided by the key 1.3000 line, and support could be provided by a previous support line around 1.2824.