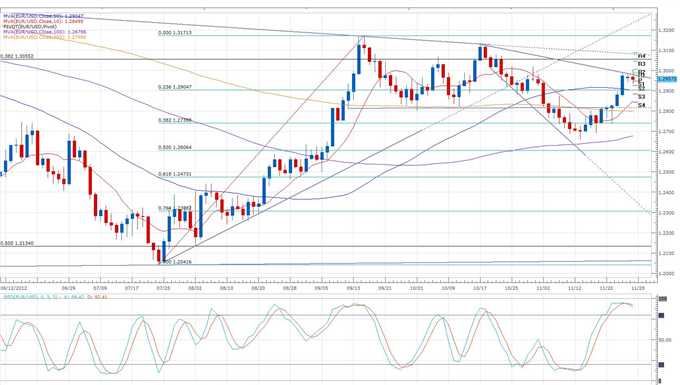 The Europe we saw at the beginning of today’s session was very different than the Europe of yesterday, at least from a trader’s perspective. Per the overnight announcement in forex news sources, Euro-zone leaders came to an agreement on Greece that lowered interest rates, returned some of the money made off of previous loans, and setup the release of the next 34.4 billion Euro aid tranche in December. What we heard from European officials following the announcement was overwhelmingly positive. German Economy Minister Roesler said the Greek Deal is a positive sign for the Euro. EU’s Barroso welcomed the deal, while German FM Westerwelle said the aid plan is a good result that is based on reforms. German lawmakers will vote on the Greek plan on November 29.

However, the Euro rally following the news of the Greece deal couldn’t even sustain 1.3000 against the USD, as the key level quickly returned to providing resistance after being briefly broken. To see some of the criticisms of the deal, please look at DailyFX Currency Strategist Ilya Spivak’s Euro Open.

The other major piece of news was the appointment of Bank of Canada Governor Mark Carney as the new governor of the Bank of England starting in July. Current BoE Governor King said the UK chose a really outstanding candidate, and Carney is the first foreigner to be chosen for the position. Sterling rallied thirty points higher from 1.6000 following the announcement.

Current BoE Governor King was speaking today at an inflation report to the UK parliament. He said that the BoE outlook is for a slow economic recovery, and UK inflation to remain above target for some time. The UK GDP grew 1% in Q3 according to a second estimate released today. The BoE has previously said that the sudden growth was due to one time factors and the economy may slip back into negative growth during Q4.

Also today, the US Dollar rose a bit when Fed member Fisher said during a speech in Berlin that he advocates setting limits to QE as soon as the next meeting. Fisher said that the US’s biggest problem is unemployment and that inflation is under control in the US. He also said that he was never in favor of operation twist.

The Euro has now erased all of the gains following the Greece announcement and is trading slight above 1.2950 against the US Dollar in currency markets. Resistance could now be provided by the key 1.3000 line, and support could be provided at the recent support level of 1.2824.