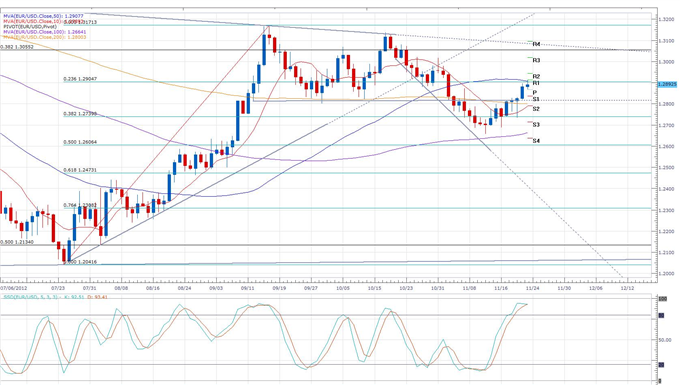 So, how well did the EU budget talks go in yesterday’s summit? It depends on who you ask. French President Hollande said a fuller picture will emerge today, and the EU leaders can find an agreement either today or tomorrow. German Chancellor Angela Merkel was not as optimistic, as she indicated that another meeting would be necessary. Meanwhile, today UK PM Cameron said that not enough progress has been made so far, and reiterated that unaffordable spending must be cut. Budget negotiations are set to continue today.

Talks about Greece and the next aid tranche are set to continue on Monday. Reuters reported today that the Troika has agreed to a 124% debt to GDP budget target for 2020 instead of 120% as originally agreed. The Euro rallied 15 points against the US Dollar following this announcement, and stopped slightly above 1.2900.

It’s unclear if the single currency was sent higher by the above Greece announcement or by S&P confirming France’s AA+ rating, while holding onto a negative outlook. EURUSD then rose a little further to 1.2910 as the France Business Confidence Indicator slightly beat expectations at 88.

The Euro is now trading slightly below 1.2900 against the US Dollar in forex markets. The key 1.2900 figure might continue to provide resistance, as it is the 23.6% retracement of the rally from July through September. Support could be provided by a previous support area around 1.2824.

There is not much US data in the North America session, as the Thanksgiving weekend continues. The US stock market closes at 18:00 GMT. Canada inflation for October will be released at 13:30 GMT.