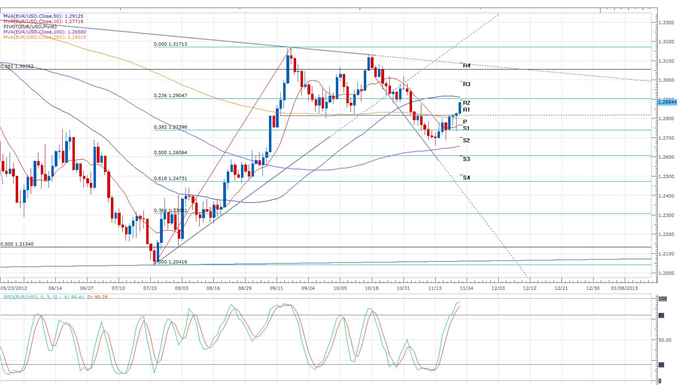 Let’s review all the factors that could possibly be worrying Euro traders in today’s session. The European Union negotiations over the budget from 2014-2020 begins today, and the UK has been threatening to veto the budget proposal if spending isn’t cut enough. Also, the meeting of Euro-zone finance ministers that was supposed to come to an agreement on the next tranche of aid for Greece was unexpectedly delayed until Monday. Finally, today’s November PMI flash estimate showed another contraction in composite output for the 14th of the 15 past months.

Yet despite all these factors that could possibly be worrying Euro traders, the single currency has risen higher against the US Dollar for the past five days, and broken resistance against the British Pound in today’s trading.

Daily FX Chief Strategist John Kicklighter pointed out in his daily trading video that pre-Thanksgiving lower volume trading has sent the S&P higher, which in turn is improving risk trends and is therefore responsible for the recent Euro rally.

Considering John’s insight, then why did Sterling not follow the Euro’s movements higher, and instead erase all of the day’s gains during the European session? There was little news and chatter preceding the decline, and some commentators have pointed to a UK Telegraph article, which pointed to some reasons why the UK may be next in line to lose its triple AAA rating, as a possible catalyst responsible for the divergence between the main European currencies.

Shortly following the decline in Sterling, Monetary Policy Committee member Weale said he would consider voting for more stimulus if it doesn’t fuel inflation, but also said that he is comfortable with the Bank of England’s current monetary policy. He also said that inflation is likely to remain above the central bank’s 2% inflation target over the next two years. He also said that there is a significant risk of Q4 economic contraction. The comments had no lasting effect on GBPUSD trading.

Ahead of the EU budget negotiations, there has been a lot of talk from officials about what they expect from the summit. Luxembourg PM Juncker said that further cuts to the EU budget beyond 75 billion Euros are not possible. On the other side, UK PM Cameron said it is wrong for the EU to propose more spending. An anonymous German official said that negotiation talks could extend beyond the summit, and a failure wouldn’t be dramatic.

In the North American session, US markets are closed for Thanksgiving, so the EU summit is likely to provide headlines and maybe provide market catalysts.