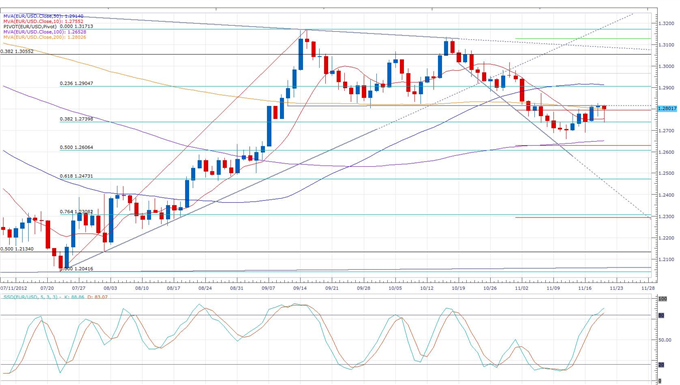 Following an overnight announcement that a final decision was not reached on Greece’s debt crisis and an agreement was not made over the next tranche of aid for the Greek government, France has led an effort to soften public perception of the inconclusive meeting of Euro-zone finance ministers.

France Finance Minister Moscovici said a Greece accord only needs some final touches, implying that there was not a great divide between Euro leaders. A French government spokeswoman also said that France will do everything to reach an accord on Greece.

It now seems that a final deal on Greece could be reached at the end of next week’s EU summit meeting, which will start with a new EU budget proposal. Greek PM Samaras was upset about the delay in aid payment, saying that technical difficulties in finding a solution do not justifying delaying the tranche. German Chancellor Merkel said that they have to make sure that Greece carries out reform, but there is a priority for Greece to stay in the Euro. Also, Greek opposition leader Tsipras said that more and more Greek debt isn’t sustainable.

In Spain, ECB member and Bank of Spain Head Luis Maria Linde said Spain is still suffering from restrictive funding conditions and the outlook for the upcoming quarter isn’t favorable. He also said that the target deficit cut for 2013 is very ambitious.

In Forex markets, the Euro has managed to erase most of the losses it experienced against the US Dollar following the announcement of the indecision over Greece’s aid tranche. EURUSD is currently trading right around 1.2800, and could find resistance at a former support line around 1.2824.

Additionally, the US Dollar set new highs against the Yen in currency trading today, the pair climbed above 82.00 for the first time since April. The opposition LDP party called for BoJ cooperation in seeking drastic easing and called for a 2% inflation target.

In economic releases, the BoE minutes revealed that MPC members have begun to question the effectiveness of quantitative easing. However, they said that further stimulus is possible in future months. In the North American session, the University of Michigan Confidence will be released at 14:55 GMT, 84.5 is expected for November.