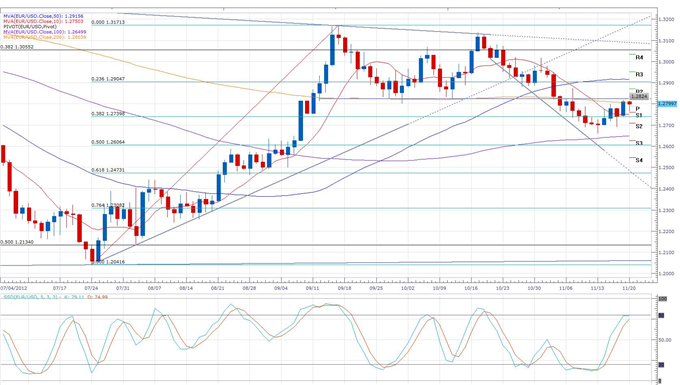 The meeting of Euro-zone finance ministers is set to begin this afternoon, and talks will be focused on Greece and the government’s debt crisis. Possible solutions to Greece’s problems include delaying the due dates for future debt payments or cutting interest rates. Also, the group must approve releasing the next tranche of aid, and the decision is likely to be based on the Troika report on Greece’s newest austerity measures.

Finance Minister Urpilainen said this morning that Finland is willing to give Greece more time, but not more money, and he said he hopes for decisions in the Euro-group today. Forex markets are likely to react to comments from officials ahead of the meeting, which begins at 16:00 GMT, and from whatever results are announced after the meeting.

Also in Europe, European Union officials are mulling a plan to bypass the threat of a UK veto on budget proposals. UK officials have said recently that they want to freeze the budget at 2011 levels, excluding inflation and stimulus margins.

News from Japan continued into the European session. BoJ Governor Shirakawa said the central bank will continue seamless monetary easing, but a 3% inflation goal isn’t realistic. He also warned that careful consideration is needed before changing BoJ laws. Shirakawa was indirectly responding to comments from Prime Minister front runner Abe, who said that he would pressure the BoJ to continue monetary easing. Shirakawa’s term will expire during the next Prime Minister’s candidacy and he could like be replaced with someone much more in favor of easing.

In Australia, a speech by RBA’s Stevens reflected the minutes from the central bank’s last meeting, which said that further monetary action was seen as a strong possibility for future meetings. Stevens also said in his speech that a China slowdown is more material than expected.

The Euro saw a few twenty point swings back and forth from a 1.2800 top against the US Dollar throughout today’s European session. None of the chatter ahead of today’s meeting seems to have had a significant effect on the Euro, and data releases, which included unchanged German producer prices, were light during the session. Resistance could be provided by a former support line by 1.2824, support could now be provided by a 2-month low around 1.2659.