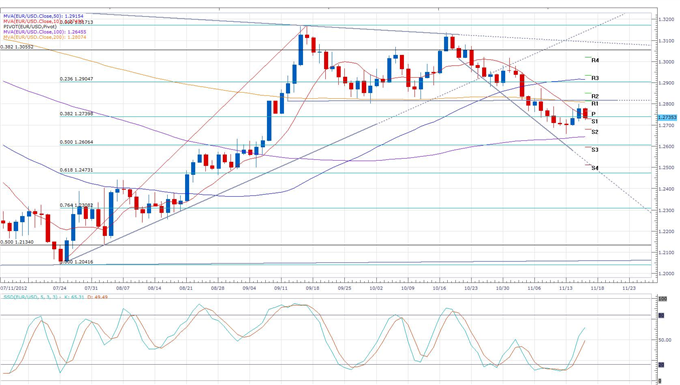 The action in today’s European session was confusing, as the Euro and Sterling made movements in various directions without significant economic releases or chatter to provide reason for all the movement. Sterling moved higher 30 points as the Asian shift was ending and Europe was opening, before erasing those gains later in the session; meanwhile, Euro has dropped 30 points towards 1.2725 without an obvious catalyst.

The little chatter there was today was started by the Bundesbank’s Weidmann. He said that a banking union itself can be stabilizing, yet a banking union as a solution to the crisis is wrong. Weidmann also cautioned against an over-hasty banking union.

In the days leading up to the announcement of the ECB’s OMT plan, Weidmann was seen as a lone contrarian in the ECB, so much so that even Merkel occasionally made comments that contradicted Weidmann, so too his comments today did not affect currency market activity. Furthermore, shortly following Weidmann’s comments, ECB member Costa said that the banking union is the key piece that is missing.

Also this morning, Swiss National Bank’s Thomas Jordan said that the central bank will continue to apply the Franc ceiling, as a stronger currency hurts the local Swiss economy. He also said that the SNB’s FX reserves expose the bank to substantial FX risk.

In Asia, the Japanese lower house of parliament was dissolved today in preparation of the upcoming elections. PM Noda’s Democratic Party is trailing opposition leader Abe’s LDP in opinion polls. Abe reiterated his call today for bold monetary easing and said he would consider changing BoJ laws. USDJPY has paired back a small part of the recent 200 point rally, but the pair currently remains above 81.00 in forex trading.