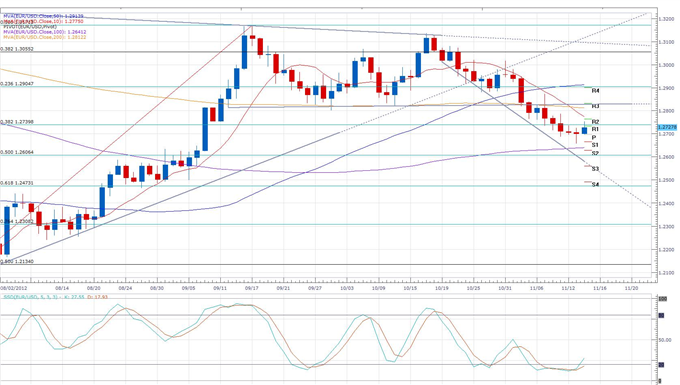 In today’s European session, the Euro and Sterling diverged in their reaction to usual risk trends as outlooks for individual economies drove trading in currency markets.

Euro and Sterling rose in tandem during the first few hours of the session following the IMF chief’s comments about Greece. Christine Lagarde said she expects a real fix and not a quick fix to Greece’s debt problem, and she wants a sustainable debt level as soon as possible in Greece. The confident comments about Greek debt allieved some worries and sent the Euro 30 points higher and above 1.2750 against the US Dollar in forex markets.

The comments also sent Sterling up to 1.5900 despite some worse than expected employment numbers, as the Euro crisis also affects the UK economy. However, GBPUSD quickly erased all its gains and set new lows following the release of the BoE’s inflation report. The report said that the central bank has lowered its economic outlook, and Governor King said that the bank will consider continuing QE, adding that the MPC did not raise the bank’s asset purchase target because of rising inflation.

Also in today’s session, a flash estimate reported Greek GDP at -7.2% year over year in Q3, versus an annual 6.3% contraction in the second quarter. Also, Euro-Zone industrial production declined by a record 2.5% in September. Neither data had significant effect on Euro trading.

Finally, the Yen dropped significantly in the session following Japan PM Noda’s comments that the Diet parliament will be dissolved on November 16 for early elections. USDJPY is currently trading above the 80.00 line.

In the North American session, US Advance Retail Sales for October will be released at 13:30 GMT, -0.2% expected.