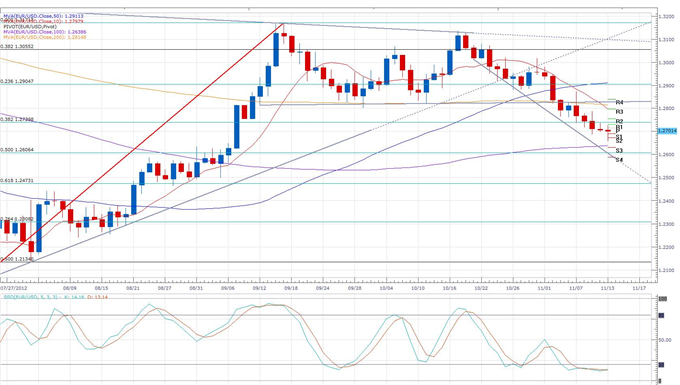 All it took for us to see a 50 point Euro rally against the US Dollar and a general rise in risk correlated currencies is a story about Germany supporting a Greek bailout tranche that is bigger than originally expected. Bild Zeitung is reporting that Germany may want to combine 3 Greek tranche payments into one 44-billion Euro payment. When the German Finance Ministry spokeswoman was asked about this story, she said that Germany still hasn’t decided about Greek loans.

Earlier in the day, German Finance Minister Schaeuble said he sees a possible cut in Greek loan rates and longer maturity. Schaeuble was speaking alongside French Finance Minister Moscovici at a briefing in Brussels, and he also said there that they are on a good track for an agreement on Greece at the next meeting of European Union leaders on November 20.

In yesterday’s meeting of Euro finance ministers, the leaders decided to extend Greece’s fiscal adjustment period by two years. They also decided to allow Greece to rollover a 5 billion Euro debt payment due this Friday, which would have sent the government into default.

EURUSD was first pushed towards 1.2690 following Schaeuble’s comments and then broke 1.2700 as the Bild Zeitung story was released. The key 1.2700 level could continue to provide support as it has in the past week, and resistance could be provided at 1.2740, by the 38.2% retracement of the rally from July through September.

In data releases today, German ZEW surveys disappointed expectations and the ZEW President said he expects the Euro crisis to weigh on the German economy for the next six months. In the UK, annual inflation was reported at 2.7%, which was much higher than expected and sent Sterling higher.

Don’t forget that European Union finance ministers are meeting today in Brussels, and news from the meeting could affect currency trading.