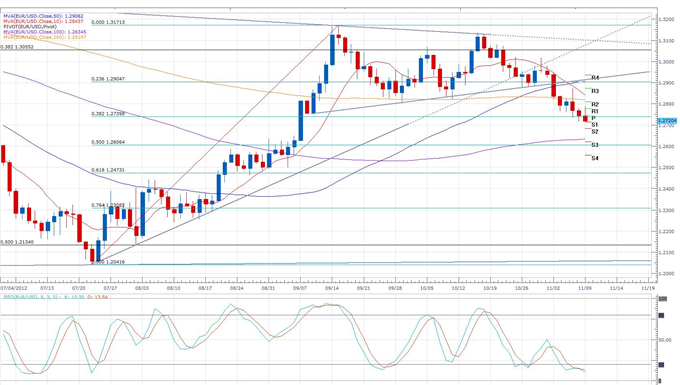 The Euro just couldn’t find a break in the first part of today’s European session. An overnight rally that brought the single currency up 50 points to 1.2780 against the US Dollar was completely erased, as data release after data release disappointed expectations.

The move lower may also be generally reflective of an overall feeling of risk aversion. The S&P 500 sold off for a second day yesterday following President Obama’s win in the US elections, and in Europe, riots accompanied a thin Greek parliament approval of PM Samaras’s austerity measures. Furthermore, it is still unclear when the EU will approve the next round of bailout that the near default Greek government so desperately needs.

The beginning of the Euro decline started with the release of the German inflation numbers for October. The final estimate of consumer prices confirmed an earlier estimate of annual inflation of 2.0%. However, the Euro began the first fifteen points of decline following the release, despite the numbers being as expected. Then, a worse than expected drop in French manufacturing in September sent the Euro down further towards 1.2750.

Shortly after, the German Economy Ministry reported that it sees the German economy weakening in the final quarter of 2012 and the first quarter of 2013 because of firms holding back investments. The German GDP growth for Q3 will be reported next week, 0.2% expansion is expected. EURUSD broke below 1.2750 in currency trading following the German announcement.

The final data release to push the Euro towards 1.2720 was Greek industrial output, which was reported as 7.3% lower in September 2012 when compared to September of the previous year. Greek inflation was also reported at 1.6% in October.

Also regarding Greece, an unnamed EU official told forex news sources that EU finance ministers are unlikely to strike a deal on the next Greek bailout during their meeting on November 12. The official said that the Troika report is needed for meaningful talks; he also said that the banking union is not on the agenda for the meeting.

The Euro continues to trade around 1.2720 against the US Dollar. The key 1.2700 figure could possiblely provide some support here, and the 38.2% retracement of the rally from July through September could provide resistance at 1.2740.