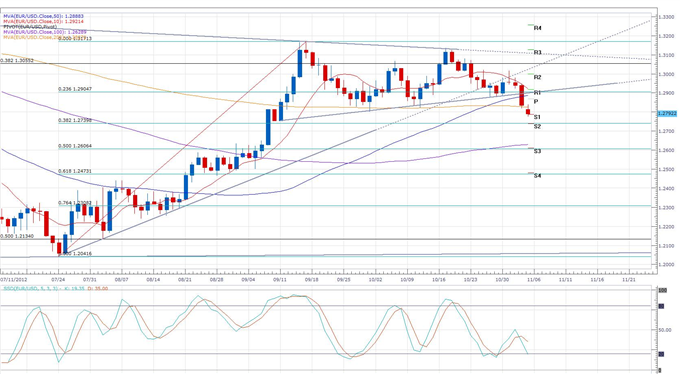 There was one clear conviction in today’s European session thus far, and that has been an aversion to risk correlated assets. The Euro fell 65 points against the US Dollar in the first part of the session without a clear story driving the losses, which were also reflected by a drop in GBPUSD, and were later continued with a drop in equity prices following the market’s open.

One of the clues we have to the drop in the Euro is a major drop in Spanish bonds following the open of trading. The 10-year bond yield climbed from 5.63% to 5.72% right before the release of the Spanish unemployment change. Unemployment was reported to have risen by 128,242 new people looking for work in October, higher than the expected 110 thousand. It’s unclear if the Spain unemployment numbers caused the drops in Euro and bond prices or if the release coincided with a spark of trading nervousness ahead of tomorrow’s US elections and ECB and RBA rate decisions.

Also weighing on the Euro, the Greek parliament will soon vote for the proposed budget with an austerity package aimed to satisfy the terms for the next bailout and maybe to convince its sovereign creditors to forget some of the country’s debts. Again, it’s tough to say whether or not this story had anything to do with today’s price action in forex markets.

Over the weekend, the G20 warned against the dangers of the US fiscal cliff tipping the global economy into a recession. Also, Merkel said that it could take up to 5 years to resolve the Euro debt crisis.

Sterling extended its declines following the release of the weakest services PMI in nearly two-years.

The Euro broke down below a 2-month low against the US Dollar at 1.2803 and is currently trading slightly below the 1.2800 line. EURUSD opened the session below the 200 day simple moving average, which had previously provided support. Support could now be provided at 1.2740, by the 38.2% retracement of the rally from July through September.