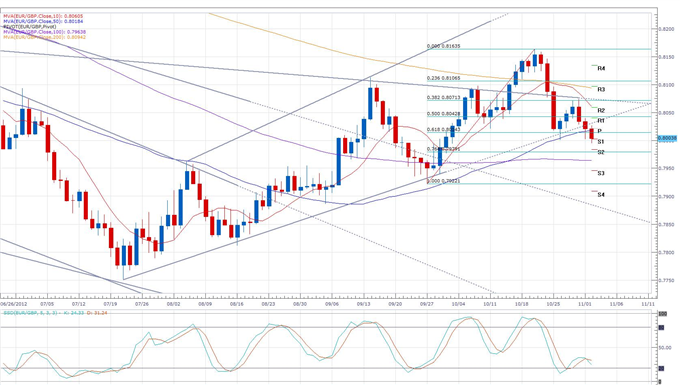 Between the end of an actual storm that just finished battering the Northeast of the US and a potential trading storm that could hit markets following today’s Non-farm Payroll changes and unemployment in the US, things have been pretty quiet thus far in the European session. Chatter and commentary from officials about the debt crisis and the struggling Greece and Spain have been practically non existent.

However, the Euro did manage to decline slightly over the past few hours. EURGBP declined thirty points and retested the key 0.8000 level following an in-line Euro-zone manufacturing PMI and a surprise expansion in UK construction activity over the course of October. Support could now be provided by the 100-day moving average, near 79.64.

October’s PMI for manufacturing in the Euro-zone marked the fifteenth consecutive month of decline in sector activity. However, the 45.4 PMI result was better than a previous estimate of 45.3, but that did not prevent the Euro from falling on the report.

The only other news in the session was out of China, where the PBOC released its quaterly monetary report. The PBOC said the economy is likely to remain stable with relatively fast growth, despite the fact that they see a slowing pace of global economic recovery. The central bank said they aim to keep the Yuan stable and monetary policy prudent. The report had no effect on major pairs trading in the forex markets.

Turning to the US employment data, remember that today’s release of NFP’s and unemployment rate is the last before the election and therefore is likely to have an effect on voters. Therefore, worse employment numbers are not only negative for the US economy and prospects on global recovery, but also could suggest a better chance for a Romney victory. Which, for example, would mean less stimulus according to those who say that Romeny will replace Bernanke with a more hawkish Fed chief, which could in turn be US Dollar positive according to people with that theory. Obviously, that’s a speculation on market thinking and not a prediction for price action, but the point is the employment results will have an extra factor weighing on market reactions.