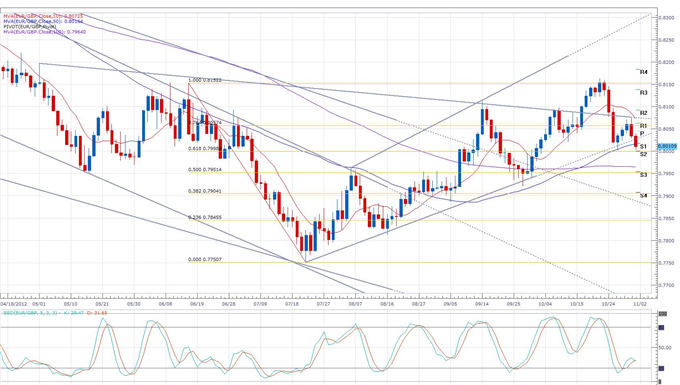 While the future of the Euro remains uncertain with doubts still looming about the future of Greece and Spain, the British Pound has still managed to find its way higher following positive statements and releases about the UK.

The Confederation of British Industry, Britain’s biggest business lobby, began the positivity before the European session when it raised its growth forecast to 1.4% in 2013 from a previous 1.3% forecast, and said growth in 2014 could reach 2%.

Then at the open the current European session, UK nationwide housing prices rose 0.6% in October, beating expectations for a 0.1% rise. The UK Chancellor of the Exchequer also said that the UK will veto any deal on the EU budget that isn’t good for the country’s taxpayers. The comments were accompanied by a sharp rise in the Pound against the US Dollar, rising above 1.6150. However, the rally may have been a delayed reaction to the general rise in optimism and not a direct reaction to the comments.

The Euro is down against the Pound in forex trading today, despite a disappointing PMI for UK manufacturing. The pair is currently trading slightly above 0.8000, where the key level is also the 61.8% retracement of the cross’s decline from June through July.

The Euro has dropped over the course of the European session, possibly because of a report that Spain will continue its ban on short selling or maybe because of general pessimism felt in forex news about the Euro over the past few days. However, the Euro found a bit of reprieve and climbed to 1.2950 against the US Dollar following German Economy Minister Rosler’s prediction that the economy will expand by 0.8% in 2012 and 1% in 2013. The move was mimicked by Sterling and did not significantly affect EURGBP.

In the North American session, US Consumer Confidence and ISM Manufacturing will be released at 14:00 GMT and could affect forex trading.