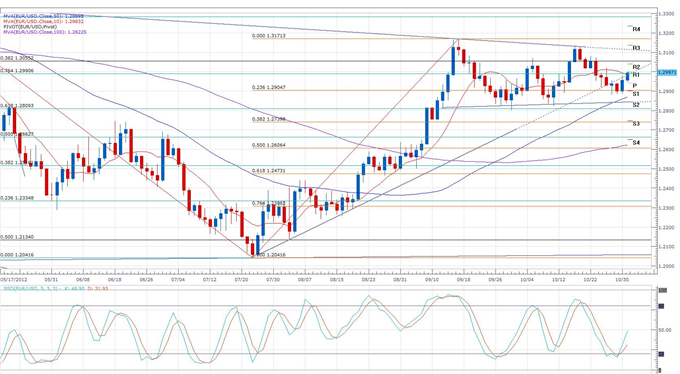 Just as we were starting to discount the chance of a Spanish bailout request and following news that Spain’s GDP slightly beat expectations in the third quarter, PM Rajoy surprised forex markets and said in parliament today that Spain needs the EU’s help to meet its budget goals. However, Rajoy did not speak about a possible bailout request, but instead said that an agreement on direct bank recapitalization is getting closer and that such an agreement would raise confidence. Furthermore, he said that the direct recapitalization is less urgent than initially estimated.

Although we may not be any closer to hearing about a Spain bailout, the talks of recapitalization were enough to inject confidence into risk correlated currencies in the morning’s trading. The Euro broke out from steady trading near 1.2950 against the US Dollar in the first half of the European session and climbed to just short of the 1.3000 key level where it is currently trading.

Slightly before Rajoy’s comments, EURUSD rose as high as 1.2975 as forex news sources reported that French Finance Minister Moscovici said that although he sees very little growth in Q3, there is no bad news from the quarter. The comments followed news that French consumer spending only rose 0.1% in September, thereby disappointing expectations.

Also released today, German retail sales rose a surprising 1.5% in September. However, the news had no significant effect on forex trading.

Later in the session, European inflation and unemployment will be released at 10:00 GMT. In the North American session, Canadian GDP for August will be announced at 12:30 GMT.

Regarding Hurricane Sandy, US markets are set to reopen today following the two day closure, and it will be interesting to see if the US stock market reacts to the damage done by the storm.