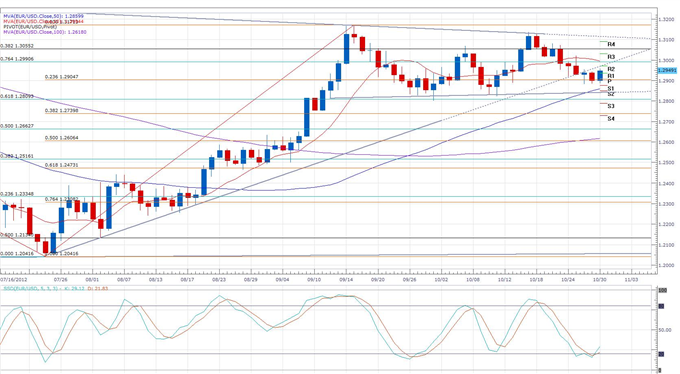 Forex News: Italian Benchmark Bond Prices Soar, and so Does the Euro

Following a meeting in Berlin, France Finance Minister Moscovici and German Finance Minister Schaeuble announced that they are aiming for a solution to Greece by November. They said that they both want to see Greece remain in the Euro-zone, and that the solution will be discussed further in tomorrow’s Euro-group meeting tomorrow.

Schaeuble declined to comment on the size of the funding gap in Greece, but added that they can’t go in the opposite direction on debt reduction. Moscovici said he doesn’t want to reopen the discussion on Euro bonds. Greece has previously said that the government might run out of money by November. The release of these statements had little effect on forex markets.

Obviously, the biggest story of the day is Hurricane Sandy and its impact on the East Coast of the US. Bloomberg is reporting estimates of 20 billion dollars of damages from the hurricane and US stock markets will remain closed today. The US markets may reopen as soon as tomorrow, and there has been no noticeable effect on currency trading from the hurricane since some early losses to EURUSD on Monday morning.

The big catalyst in today’s trading was the BoJ decision to expand asset purchases. The stimulus expansion barely met expectations and therefore had a positive effect on Yen trading. BoJ’s Shirakawa and a government official speaking after the meeting both agreed that the central bank must continue to act until an end of deflation.

In Spain, the GDP in Q3 was reported to have contracted less than expected and therefore gave a brief boost to the Euro to just a bit short of 1.2950 in trading. That gain was soon erased by higher than expected unemployment in Germany.

Finally, an Italian bond sale saw a drop in 10-year bond yields to 4.92% from 5.24% in September’s sale. EURUSD bounced back towards 1.2950 following the sale news, where the currency is still trading.

The North American session calendar is light and traders should keep an eye out for updates relating to Greece or any serious changes to damage estimates from the hurricane.