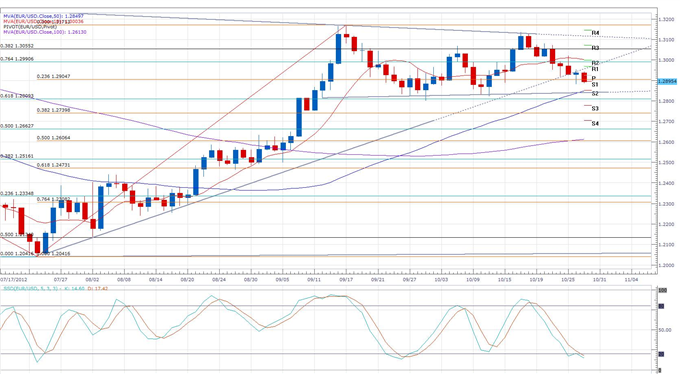 Forex News: Euro Sells Off as US Hurricane Forecasts Worsen

Despite a relatively quiet European session in the forex markets, EURUSD still fell 30 points and struggled to remain above the key 1.2900 line. One of the more likely reasons for the fall in the Euro is due to Hurricane Sandy, which has already caused the pre-emptive closing of today’s US stock market and many businesses along the East Coast. The New York Stock Exchange may remain closed on Tuesday, depending on the effect of the hurricane.

Beyond the hurricane, Greece provided the most headlines in today’s session. The Troika presented a plan to a meeting of Euro finance ministers last week to restructure Greece’s debt in such a way that public sector lenders would take heavy losses, according to a Spiegel report.

Initial reaction to the story came from ECB’s Nowotny, who said that forgiving Greek debt is impossible for the central bank because it would mean the bank is indirectly financing governments. German Government Spokesman Seibert said that a Greek debt restructuring program is out of the question.

In other economic releases, UK mortgage approvals in September surprised to the upside as there were more than 50,000 home loans approved in September. However, sterling and FX trading was unaffected.

The Euro is currently trading slightly below 1.2900 against the US Dollar. Support could be provided by a month-long low around 1.2808.