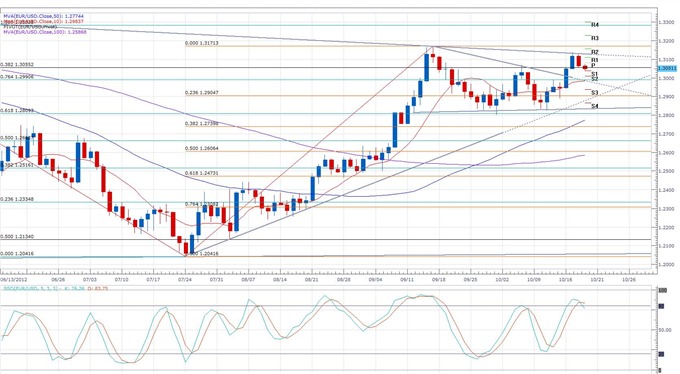 French PM Hollande to Visit Greece in Show of Confidence

Following the official approval of the joint banking supervisor during the summit of EU leaders, the Euro has consolidated some of the gains made during the anticipation in the days before the summit, thereby adhering to the old saying, ‘buy the rumors and sell the news’.

ECB’s Nowotny called the EU’s timetable for the ECB to step into the role of the banking supervisor realistic. Nowotny said the ECB will be a fully functioning supervisor by the beginning of 2014, and possibly be ready to supervise a few banks even earlier than that. It seems that the target of a functional bank supervisor by January of 2013 has be been put aside.

Also, Nowotny said that Europe’s recovery is weaker than expected and that 2013 growth will not be as strong as hoped. Regarding inflation, Nowatny said he doesn’t see an inflation problem, but the central bank would be ready to act immediately on any inflation concerns. Finally he said that the ECB has no exchange rate target. Nowotny’s comments sent the Euro lower towards 1.3050 against the US Dollar.

Also announced today, French PM Hollande will be visiting Greece in the coming days in what he calls a show of confidence. Hollande said Greece’s future is in the Euro-zone. Following the end of the EU summit and the end of the talks between Greece and the Troika, we could expect to hear more about the plan for 13.5 billion budget cut and the plan for the next bailout payment.

EURUSD first fell from 1.3075 at the beginning of the session, following BoJ’s Shirakawa’s comments that the Euro-zone economy is gradually slowing. He said the global economy is still at risk of a slowdown, but complimented the US economy for gradually improving. Surprisingly, the Euro made more of a move after his comments than the Yen did.

EURUSD could find resistance here at 1.3055, by the 38.2% retracement of the pair’s rise from the all time low to the all time high. Support could be provided by the key 1.3000 line.