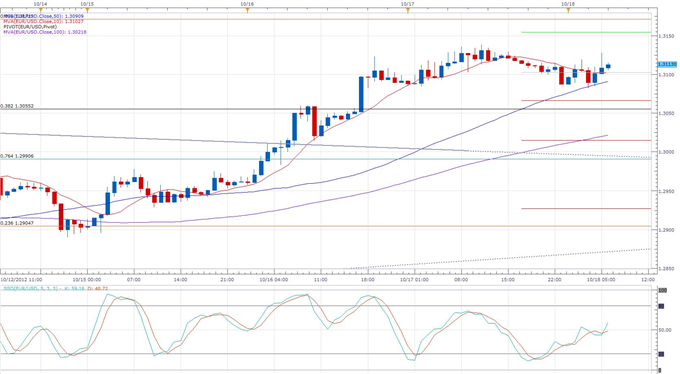 The EU summit starts today and traders continue to look for comments about Spain, Greece, and the possible banking union as early indicators of the results of the 2-day meet. We heard yesterday that the Troika concluded talks with Greece and an agreement could be announced within days.

German Chancellor Angela Merkel spoke to the Bundestag at the beginning of today’s European session, and in her comments she made clear that she wants Greece to stand by their commitments. She criticized Greece saying that too many reforms go too slowly and that much is changing at a Snail’s pace. She expects PM Samaras to deliver the Troika update to the summit.

Concerning other major issues, Merkel said that a Spain bailout decision is up to Spain, but the ESM rules will apply to any Spain bailout. She also said that only labor market and structural reforms would help. Finally, she said that banking supervision isn’t sufficient, and that the EU needs the power to intervene in national budgets. As Germany is the biggest economy in the Euro-zone, and therefore a main supplier of the ESM fund, the final suggestion could mean more German say over its neighbors’ fiscal policies. The Euro declined following the Greek comments, and EURUSD temporarily fell below 1.3100.

The biggest news of the day was the UK retail sales numbers. Retail sales increased by an unexpected 0.6% in September, which drove Sterling up to 1.6150 against the US Dollar, and may have been the reason that Euro climbed back above 1.3100 and erased earlier declines.

Also reported today, the Swiss trade balance for September was reported at 2.01 billion Francs, as exports increased by an unexpected 2.6%.

Finally, the Greek news site Ekathimerini reported that Spiegel wrote that the decision to grant Greece a 130 billion Euro bailout by the end of November has already been decided. However, there was no Euro activity to support the report.

EURUSD could now see resistance at 1.3171, by the 6-month high. Reports from the EU summit or any updates about a possible Greece or Spain bailout could affect trading.