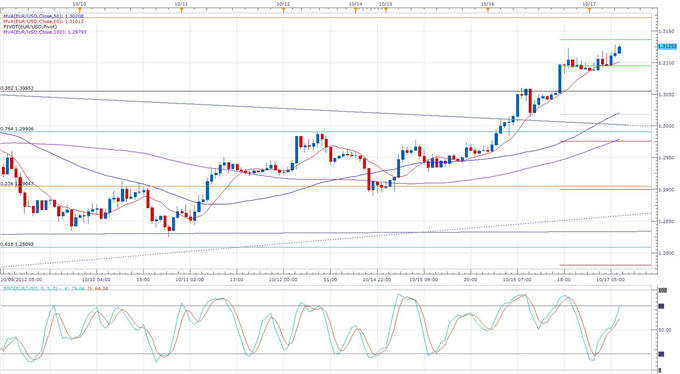 Euro Climbs Above 1.3100 As Spanish Yields Drop to a Record Low

Spain, Greece, and a banking union are the topics on everyone’s mind only one day before the start of the summit of EU leaders. Yet despite all the challenges relating to these three issues, the Euro has rallied nearly 300 points in the week leading up to the summit.

The EU released a statement today that the focus of the summit will be on the banking union, and they do not expect decisions on a Greece or Spain bailout. However, these comments contradict those of a German official, who said that he doesn’t see a banking union decision at the summit, as it needs more work from finance ministers. The market did not significantly react to either comment.

There have also been conflicting reports regarding the progress of Greece and Spain. Yesterday, we were told that Greek officials are starting the final round of talks with the Troika, yet we heard reports today that the talks are breaking down. In Spain, just yesterday the Wall Street Journal reported that Spain is considering a credit line from the ESM. Yet today, we heard that PM Rajoy told Merkel that Spain doesn’t need a credit line.

Despite that report, Spain seemed to be a point of optimism during the European session. The Spanish 10-year yield dropped 30 basis points following the start of trading, down to a 6-month low of 5.49%. The move was likely a reaction to the previous night’s BBB- rating by Moody’s. The rise in bond prices was accompanied by a 30 point Euro rally that brought it above 1.3100 against the USD.

EURUSD has continued to trade slightly above 1.3100 since that early session move. Resistance could now be provided by a 5-month high at 1.3171.

In economic releases, UK jobless claims and the ILO unemployment rate surprised to the upside and drove GBPUSD to 1.6150. The BoE minutes were also released, which announced that despite a unanimous vote, MPC members were split over QE.