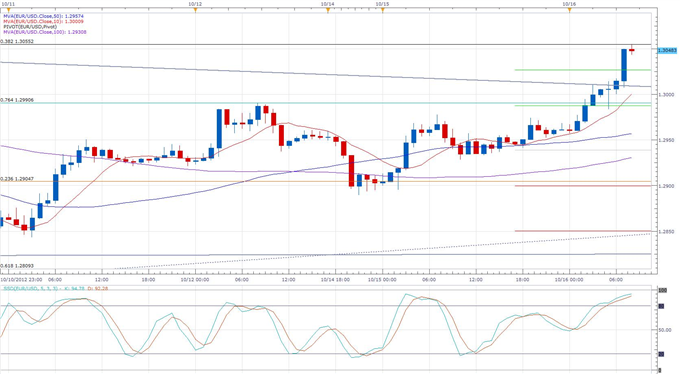 Euro Climbs Well Above 1.30 on News of a Spanish Credit Line

During the first half of Tuesday’s European session, the single currency rallied against the US Dollar for the second day, as European official spoke of a credit line for Spain ahead of Thursday’s summit of EU leaders.

ECB’s Bonnici started the session by advocating that Spain take a bailout before being forced to do so by the markets. His comments follow speculation that Spain could wait for the markets to worsen, on hopes of receiving better bailout conditions. Bonnici also said that Greece may need more time to meet debt targets. Both comments advocate developments that would be considered helpful in recovering from the Euro debt crisis, and therefore drove EURUSD nearly 20 points higher, stopping just short of 1.2900.

Also regarding Spain, the Wall Street Journal reported that Spain is considering a specific plan to ask the ESM for a credit line instead of a definite bailout amount. The article was anonymously quoting a Spanish official. Spain also released a report ahead of the summit, in which they said they see bill auctions as the first step to fiscal union.

Euro was able to break 1.3000 against the US Dollar, as Finnish PM Katainen said that the banking union is the most pressing issue for the summit. Although Katainen said that Finland is against common bonds and against raising the firewall size, he said that his country will not just oppose everything.

Both UK and Euro-zone annual inflation rates for September were released today. UK inflation set a 3 year low at 2.2%, but the drop in inflation was as expected. Euro-zone inflation was less than initially estimated at 2.6%, but was steady with August’s inflation rate. The lower than expected inflation, combined with some negative comments about the Euro-zone from the ZEW survey makers, pushed EURUSD back under 1.3000 temporarily, before the single currency climbed back above 1.3000.

In Greece, PM Samaras said yesterday that the final talks with the Troika will soon continue, but not in time to deliver the Troika report to the summit of EU leaders on Thursday and Friday.

Also, as these lines were being written, two senior German lawmakers said that Germany is open to Spain taking a precautionary credit line, confirming the WSJ story from the beginning of the article. EURUSD rallied to just short of 1.3050 following the comments.

In the North American session, US inflation rate will be released at 12:30 GMT, 0.5% is expected.