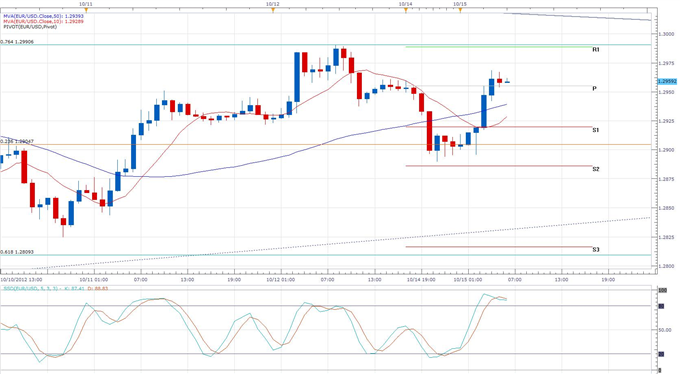 The first half of Monday’s European session saw a determined 65 point gain in Euro trading against the US Dollar and a 40 point gain in GBPUSD trading; yet those looking for a definite reason behind the modest rallies in the two risk-correlated currencies could be left scratching their heads.

The one clue we have to the rally in Sterling in Euro is a coinciding rally in the price of German 10-year bonds. The benchmark bond yield dropped from about 17.75% to below 17.20% over the first half of the European session. The Greek debt yield set a new yearly low.

The rise in Greek bond prices could have been a result of rising optimism that EU leaders will agree to give Greece more time to pay back its current debts or come closer to allowing the next bailout payment to the struggling Greek government during the EU leaders’ summit on October 18-19. Over the weekend, German Finance Minister Schaeuble ruled out the possibility of a Greek sovereign default, which may come quickly without another bailout payment.

Another topic that could provide optimism for the EU leaders’ meeting is the formation of a banking union and a joint supervisor of Euro banks. This is seen as another key step that could help the recovery from the current debt crisis.

However, the talks between the Troika and Greece are still ongoing, and suggesting that optimism over Greece is behind today’s rally is merely speculative.

EURUSD is currently trading around 1.2960, after finding support around 1.2900 earlier in the trading day. Resistance was provided last week, and could continue to be provided, at 1.2991, by the 76.4% retracement of the decline from the beginning of May towards the end of July.

In the North American session, US Empire Manufacturing for October will be released at 12:30 GMT, -4.00 is expected.