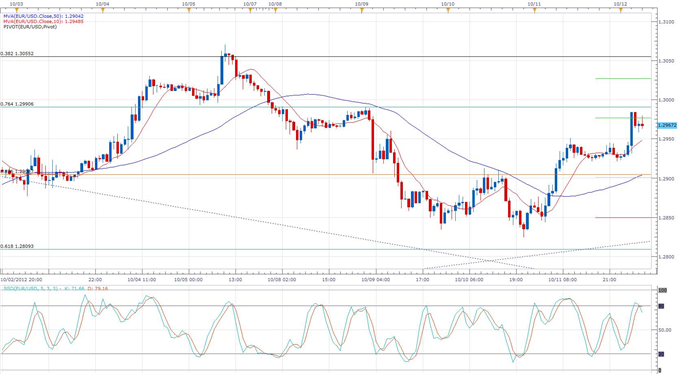 European Uncertainty Will be Overcome In a Year, Says Schaeuble

Friday’s European session again saw a bevy of comments from officials from around the globe, and as positive comments outweighed the negative ones, the Euro climbed another 40 points against the US Dollar.

The initial Euro move came as the Asian session was closing and the European markets were opening. EURUSD climbed 50 points from 1.2935, coinciding with a GBPUSD rally, but it is not specifically clear what caused the risk correlated currencies to rally. BoE’s Paul tucker told a conference in Tokyo that he is pleasantly surprised with the take up of the Funding for Lending Scheme. His comments may imply that the BoE won’t have to add to QE in the upcoming month, which would be Sterling positive, but does not easily explain the rise in Euro.

Instead, the rally may have been due to the general building anticipation for Spain to agree to the ECB bailout and ensuing conditionality. Spain’s Economy Minister Luis de Guindos said today that there is no political resistance from within the Euro-zone to a Spanish bailout request, according to a Reuters report. Guindos added that Spain’s decision to ask for aid would not depend on a rating agency, referring to a threat of junk rating of Spanish sovereign debt. Again, the reason for the rally is still uncertain.

Also in the Euro-zone, German Finance Minister Schaeuble said that he is certain that most European uncertainty will be overcome in a year. He said the Euro-area is delivering on deficit target cuts. However, regarding Greece, Schaeuble said again that he is waiting for the Troika report.

In other economic releases, initial estimates for Italian inflation were confirmed at 3.2% annually. Also, Euro-zone industrial production unexpectedly rose for the second straight month. However, neither release had a significant effect on trading.