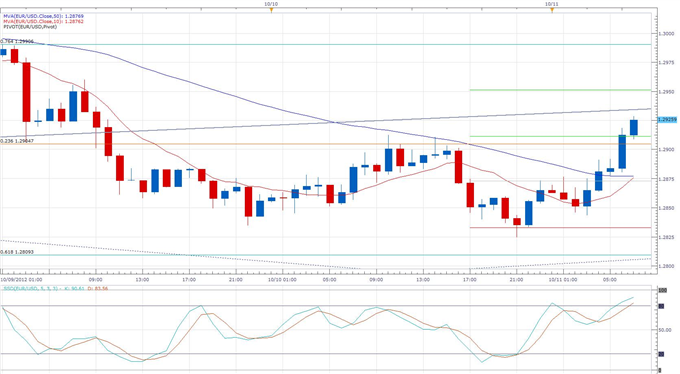 The European session saw a slow climb for the Euro, as the single currency found it’s way above 1.2900 against the US Dollar, just a couple of hours before the start of the North American session.

At the open of the session, the Euro began to climb higher from 1.2850 after German Finance Minister Wolfgang Schaeuble said that no one should doubt Europe’s determination to start the joint banking supervision. However, he added that having the single supervisor ready by the beginning of 2013 is an ambitious endeavor. Regarding Greece, he said that he is waiting to see the results of the Troika report. Schaeuble was speaking at a summit of G7 finance ministers in Tokyo.

The Euro made it up to 1.2875 against the US Dollar as ECB Member Nowotny said that he sees no more need for a change of interest rates at the moment. However, he added that the economic outlook for the Euro and the world has deteriorated. He was optimistic that thw possibility of a Euro breakup is not an issue.

Nowotny’s comments were soon followed by the official release of the ECB bulletin from their last meeting. The minutes confirmed a downward outlook for the Euro economy, but the single currency still climbed slightly on the bulletin’s strong remarks about the OMT program.

In Greece, the unemployment rate was reported at 25.1% in July. Also, the Greek January through September government budget deficit was 12.6 billion Euros, which was better than the 13.5 billion Euro target. Earlier in the day, IMF’s Lagarde said that Greece needs more time to repay its debts.

The Euro made its move above 1.2900 as an EU spokesman said that Spain is implementing major structural reforms. The spokesman said he had no comment about the S&P downgrade. The Spanish Deputy Economic Minister Latorre said he expects ECB bond purchases to begin soon ‘one way or another’. Although Latorre said that Spain is still considering whether or not to ask for the bailout and comply with the ECB’s conditions.

In the North American session, the US trade balance for August will be announced at 12:30 GMT, -44 billon dollars is expected.