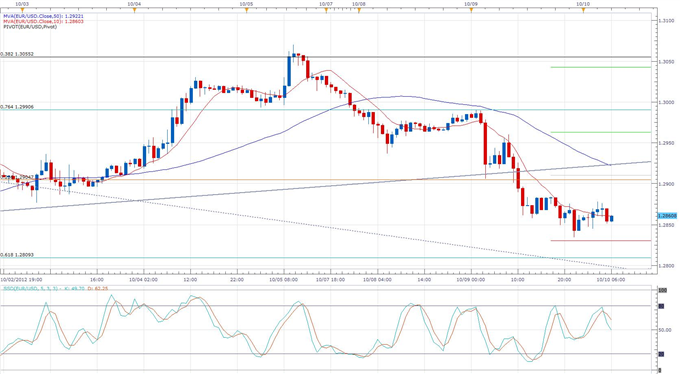 Talk of implementing the single banking supervisor and of staring OMT bond purchases continued to provide headlines during today’s European session. However, none of the officials’ comments nor any of the economic releases had a significant effect on Euro trading.

Italy’s Debt Agency head Maria Cannata said earlier in the session that Italy’s funding needs would drop next year, as the sovereign debt is sustainable at the current yields. She said that the Draghi effect is going to last for some time, referring to the ECB’s OMT plan. Today, Italy sold 364-day and 91-day bills for a total of 11 billion Euros. The yield on the 364-day bills climbed to 1.941% from 1.692% in September’s sale.

Regarding the OMT, ECB Vice President Vitor Constancio reaffirmed the message that the ECB is ready to start purchases of the bonds of distressed nations, if those nations agree to conditionality. He said the central bank would be treated like any other investor, and the ECB doesn’t share the IMF’s view of deflation risks. Constancio also said that it would be easier for the ECB to assume the banking supervision role in 2014, and a January or June 2013 deadline could be too demanding. The European Parliament is currently discussing the banking union proposal following a Q&A with ECB’s Draghi yesterday.

Additionally, a German government official spoke anonymously about monetary policy today, saying that it can’t solve global problems. He went on to say that Europe is not the sole cause of global risk, as Japan and the US are also contributing to risk. He called for fiscal and structural adjustments to solve the Global crisis.

Also in Germany, ECB member Jens Weidmann said the central bank must make sure that the Euro maintains its value. He said that central banks must have the courage to stick to their stability mandates in times of crisis. Weidmann was seen as the sole opponent to the OMT bond purchase plan among ECB members.

Furthermore, the Bank of Spain Chief Economist Malo De Molina said that the Spanish government growth forecast, upon which the deficit to GDP target is based, is too optimistic. He also said that the Spain adjustment is proving slow and faces risks.

In economic releases, French and Italian industrial production numbers were both better than expected in August, but that did not affect Euro trading. Also, Goldman Sachs’s chief currency strategist said going long the Euro over the Australian Dollar could be the trade of the century, according to an article in the Wall Street Journal; yet EURAUD is trading lower in today’s session.

Back to the Euro, EURUSD is currently trading slightly above 1.850, as a weekly low was set in today’s session by 1.2835. The 61.8% retracement of the decline from May through July sits at 1.2809, which has provided support over the previous month.

In the North American session, the Fed will release its Beige Book economic survey at 18:00 GMT.