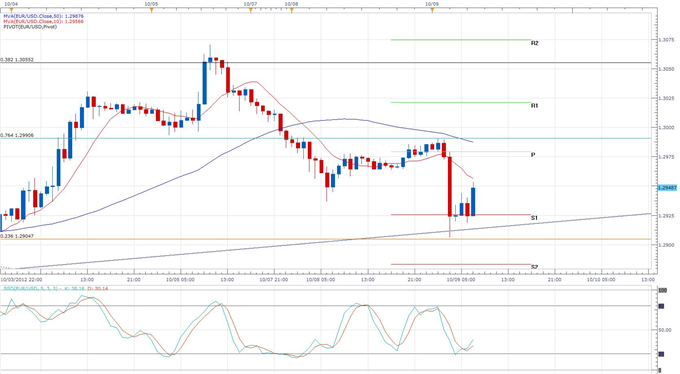 There was only one clear move in Euro trading during today’s European session, and that move was down. Right before ECB President Mario Draghi began his speech to the European parliament, EURUSD began its sharp decline from just below 1.3000, and the decline continued as Draghi opened his speech with talk of systematic risk, and the pair only stopped a few points above 1.2900.

Draghi said there are three main risks to the economy, listing setbacks in reform and financial instability as two of them. He continued by saying that economic risks are to the downside, predicting that inflation will drop below 2%, and later added that the Euro-zone probably had a weak third quarter.

Talking about the fiscal action during the crisis, Draghi said that austerity can hurt growth in the short term, but said that he doesn’t know of any other option. Regarding Greece, he said that the progress has been significant, but he is waiting to see the Troika report. He called Spain’s progress ‘faster than expected’.

Finally, regarding his OMT bond purchase plan, Draghi said the OMT is unlimited but not unconditional. He said that the central bank chose the OMT over further rate cuts because it distributes more evenly between nations and provides an effective backstop. He repeated that the bond purchases will only be in secondary markets, and only for 1-3 year bonds. Additionally, he said that he maintains an open mind about publishing the minutes from the ECB meetings, but warned that such a move could nationalize monetary policy.

Some of Draghi’s more positive comments drove the Euro back towards 1.2950, where it is currently trading. A two month upward trend channel could provide support around 1.2914, and resistance could be provided by the key 1.3000 line.

Also today, German Chancellor Angela Merkel arrives in Greece today for the first time since the onset of the Euro crisis. Greece has been given a ten day deadline by the Euro-zone and IMF to implement reforms, which are intended to be submitted to the Troika just before the next European Union summit.