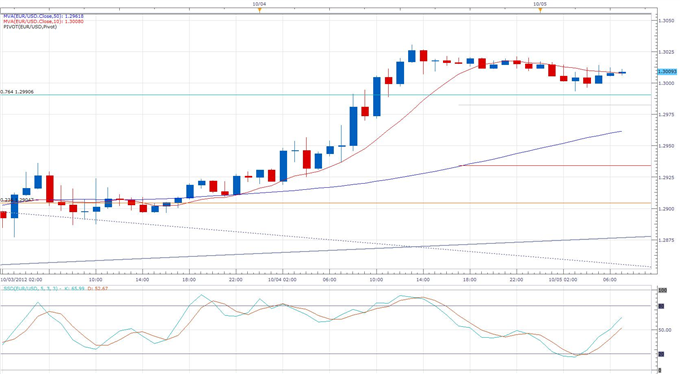 Despite a plethora of headlines concerning all the current major themes of the debt crisis, the Euro showed barely any movement in today’s European session, as anticipation builds for the upcoming US nonfarm payroll and unemployment numbers.

The day started with a story from Reuters; the story was about another plea from Greek PM Samaras to a German newspaper. Samaras said that Greece can only manage until the end of November without more aid. He called on the ECB to help by lowering the interest rates on existing Greek debt or to rollover the debt when the bonds mature.

Later in the day, we were told that Chancellor Merkel will be travelling to Athens on October 9 to meet with Samaras. The program for the meeting has yet to be finalized, but the spokesman called it a normal visit. Meanwhile, an unnamed European Union official said today that Greece has enough money to contribute its first 900 million Euro payment to the ESM bailout fund by the October 12 deadline. The official also said that the EU ministers will discuss the Greek aid deal at their meeting next week, but a decision will not be made about the deal for at least two more weeks.

The same EU official said that the Spain bailout is not imminent, if it will happen at all. Meanwhile, Spanish Deputy Economy Minister Latorre said that there is no reason for Spain to miss its deficit target and that Spain is sticking to its growth forecast for 2013. This follows doubts that Spain’s growth forecast is too optimistic for next year and will cause the country to miss its targets.

Additionally, the IMF lowered it global growth forecast to 3.3% in 2012, down from a previous estimate of 3.4%. The KOF Economic Institute lowered its forecast for Swiss growth to 0.9% in 2012 and 1.3% in 2013. Besides for that, there were few economic updates during the European session.

The US nonfarm payroll and unemployment numbers for September will be released at 12:30 GMT, and any deviation from expectations could be reason for a move in US Dollar crosses.