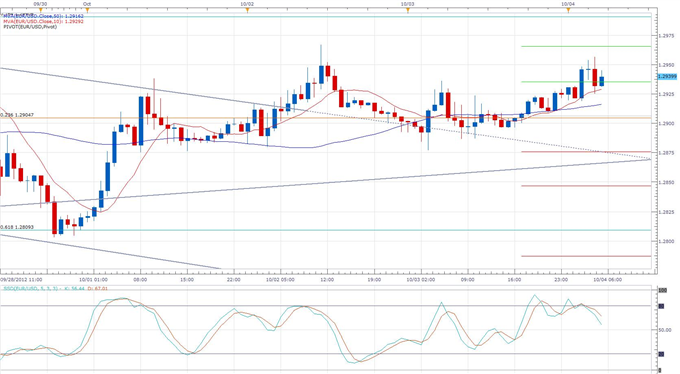 In today’s European session, it seems like most of the significant economic releases and market moving stories have stepped aside in anticipation of the monthly ECB and BoE interest rate decisions. The ECB is expected to keep the interest rate at 0.75% in today’s monthly meeting.

However, Draghi’s public comments following the meeting are likely to draw just as much attention as the interest rate announcement. It’s been one month since he instituted the OMT bond purchase program, and as far as we know, the plan has yet to be put into action. Spain must first submit a bailout request to the ESM fund before they can receive the ECB’s help with bond prices, and Spain has thus far refused to commit to such a request. Investors are looking to hear from Draghi about any updates to the ECB’s purchase plan.

Initial excitement over the meeting and Draghi’s upcoming comments may have been responsible for a 30 point Euro rally at the beginning of the European session, which brought the single currency up to 1.2950 against the US Dollar.

However, most of the gains were erased as the average yield during a sale of 3-year bonds rose to 3.956%, up from 3.845% in September. The Spanish Treasury sold 2014, 2015, and 2017 bonds for 3.99 billion Euros today, just barely missing a maximum target of 4 billion. The higher yields could be indicative of growing doubts that Spain will in fact ask for help from the ECB to keep their 3-year bond prices in check.

Also in Spain, Catalonia President Artur Mas said that a Spanish bailout is inevitable, according to an AFP report. However, Mas should not be considered representative of the national government, as he has been fighting with the government recently over Catalonia’s budget and possible break-off from Spain.

In Cyprus, Bloomberg reported that the country’s bailout will total 11 billion Euros. 5 billion of which will be used to recapitalize banks that lost money in the Greek bank restructuring, and 6 billion will be used for upcoming debt payments. Also, France sold 10-year bonds for an average yield of 2.28% this morning.

The BoE is expected to keep their interest rate at 0.50% and their asset purchase target at 375 billion in today’s meeting. In the North American session, the Fed will release the minutes from their September 13 meeting at 18:00 GMT.