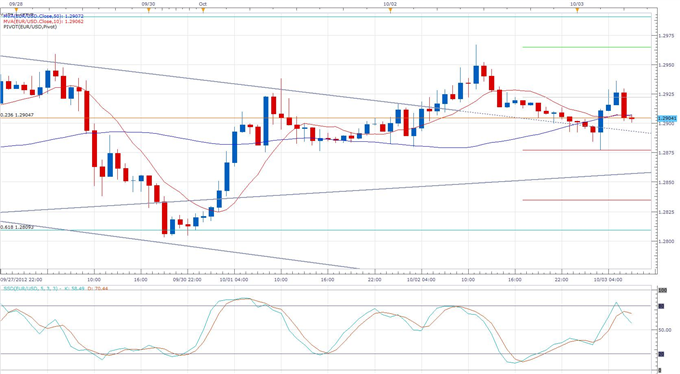 Although there were no updates on the specific stories linked to the future of the Euro-zone, those stories being Spanish bailout, Greek debt cutting, and the banking union, Euro sentiment still seemed to slightly improve over the session following a few better than expected releases.

The Euro lost some of its footing against the US Dollar overnight, following a release of weak Chinese PMI’s that dimmed the outlook on the global economy. However, the Euro-zone Purchasing Managers’ Index releases over the first part of the European session showed better than originally estimated output and sent EURUSD back above the key 1.2900 figure.

In Cyprus, the president said that the country can’t accept the Troika’s reccomendations on the bailout and terms have to be improved. This story was followed by EURUSD dropping back closer to 1.2900.

In the United Kingdom, the PMI for services was worse than expected but still signaled expansion in activity. The release had no significant effect on Sterling trading.

In the North American session, traders should keep their eyes out for further updates about the three stories mentioned above, and the ISM non-manufacturing composite for September will be released at 14:00 GMT.