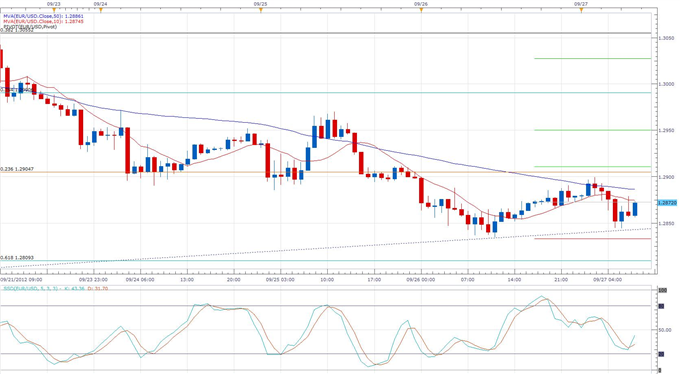 Considering the large amount of doom and gloom reports and forecasts seen during the European session, the 50 point drop from the daily high set before the start of the session could have been much worse. The Spanish and Greek governments are both working on budget plans that are likely to send angry citizens back to the streets.

Spanish PM Rajoy will meet with ministers today to approve a budget for 2013 that will cut the deficit by at least 18 billion Euros. Demonstrators have been protesting all week against the austerity measures. In Greece, following a meeting of the coalition leaders, the Democratic Left Party reported that there was a basic agreement on the budget that is likely to cut 11.5 billion Euros, although there are still a few issues to work out. This news did not have a significant effect on Euro trading.

Furthermore, Spanish banks showed a 1.1% decline in private sector deposits in August, which was explained as caused by financial institutions, other than banks, pulling funds. The drop follows the 4.7% decline of private deposits in July, and suggests a lack of confidence in the Spanish banking system. The news started a decline in EURUSD that pulled the pair farther away from the 1.2900 key level.

Following an unexpected drop in economic confidence in September, the Euro continued to fall towards 1.2850 against the US Dollar. The confidence survey missed expectations to remain steady with August’s result.

The news of the Greek budget plan may have brought EURUSD back up towards 1.2880 again, before pessimistic comments from Fitch and Philly Fed’s Plosser brought it back down again towards 1.2850. Fitch revised its forecast for Euro-zone economic growth to -0.5% in 2012, and 0.3% in 2013. They also warned that the US fiscal cliff could drag the global economy into a recession.

Also in the Euro-zone, German unemployment rose by 9 thousand in September, which was better than expected. The release did not have a significant effect on Euro trading. Also, Italy just missed their 7 billion Euro maximum target in a sale of 5 and 10-year bonds today. Yields for both bonds significantly dropped from their August sale price.

In the UK, BoE Policy Maker Fisher said the Q3 GDP will be strong and said that inflation is currently higher than the central bank expected because of energy prices. The announcement sent GBPUSD lower, to 1.6170, on raised doubts that the BoE would take action in their next policy meeting. However, a positive final revision of the UK GDP to -0.4% for Q2 sent GBPUSD back above 1.6200.

In the North American session, US durable goods orders for August will be announced at 12:30 GMT. Also, an announcement regarding the approval of the 2013 Spanish budget is expected.